The company will go electric and expects to profit on that more than previously anticipated.

Volkswagen Group announced the NEW AUTO strategy through 2030 - a new plan of transformation into a "a software-driven mobility company."

At the same time, the company acknowledges that its ICE business will gradually fade - probably by more than 20% by 2030. Until the ICE business dries up completely, the company intends to use the profits from selling conventional cars to expand its EV business, and to invest in software and autonomous driving.

"Profit and revenue pools are expected to shift gradually from internal combustion engine cars (ICEs) to battery-electric vehicles (BEVs) and then to software and services, boosted by autonomous driving. The ICE market is set to decline by more than 20% over the next 10 years. In parallel, BEVs are projected to grow rapidly and overtake ICEs as a leading technology."

One of the most important points in the NEW AUTO plan is that the company expects noticeably better profitability from electric cars.

"Overall, margin parity should be reached within the next two to three years.

To reflect its new strategic approach, Volkswagen Group raised its ambition level for operating return on sales in 2025: The Group increased the original range of 7‐8% to now 8‐9% as the foundation for its Planning Round 70 in November 2021."

CEO Herbert Diess during the presentation of NEW AUTO, the Group’s strategy through 2030 said:

“We set ourselves a strategic target to become global market leader in electric vehicles – and we are well on track. Now we are setting new parameters. Based on software, the next much more radical change is the transition towards much safer, smarter and finally autonomous cars. That means for us: Technology, speed and scale will matter more than today. The future of cars will be bright!”

Volkswagen Group announced four key technology platforms that will lay the foundation for the transition:

In terms of platforms, the Volkswagen Group is moving to a next-generation all-electric mechatronics platform - the Scalable Systems Platform (SSP), which will replace the existing ICE/BEV platforms for all types of cars.

There will be one unified architecture for the whole product portfolio starting in 2026. The volume of the SSP willo be higher than MEB and PPE combined.

The company intends to invest around €800 million into a new Research & Development facility in Wolfsburg to develop the SSP platform, which will be open to other auto manufacturers, just like the MEB today.

"The SSP (Scalable Systems Platform) as Volkswagen Group’s next generation mechatronics platform will significantly reduce complexity over time. As the successor of MQB, MSB, MLB, as well as MEB and PPE, it will extend the consolidation from three ICE-platforms to two BEV-platforms, to finally one unified architecture for the whole product portfolio. From 2026 onwards, the Group plans to start the production of pure electric vehicles on the SSP. This next generation will be all-electric, fully digital and highly scalable. Over its lifetime, more than 40 million vehicles are projected on this basis."

The strategic goal is to develop a single global software platform for all cars in the group:

The software stack 2.0 (E³ 2.0) will include a unified operating system for vehicles from all Group brands. Another key feature will be level 4 readiness, meaning that customers can hand over the steering fully to the car."

In terms of batteries - the Volkswagen Group is moving towards vertical integration. The plan is to deploy six gigafactories in Europe alone (240 GWh annually total) by 2030, together with partners.

Two sites were already announced and one is under consideration:

Volkswagen's gigafactories will produce one unified battery cell format (for up to 80% use cases by 2030), which is promised to enable cost reduction by 50%.

"Volkswagen Group plans to establish a controlled battery supply chain by setting up new partnerships and tackling all aspects from raw material to recycling. The goal is to create a closed loop in the battery value chain as the most sustainable and cost-effective way to build batteries.

In order to reach its goal, Volkswagen Group is advancing battery competence and reducing complexity. To that extent, it is introducing one unified battery cell format with up to 50% cost reduction and up to 80% use cases by 2030. Six giga factories in Europe with a total production capacity of 240 GWh by 2030 will help to secure battery supply."

The Volkswagen Group intends to offer customers a one-stop solution from charging hardware to Energy Management Services. The company, together with partners will implement an overall of 18,000 high-power charging (HPC) points (up to 350 kW) in Europe, 17,000 in China and 10,000 in the U.S. and Canada.

"In addition Volkswagen is to boost public charging infrastructure in Asia, Europe and America building on successful Group initiatives such as CAMS in China or Electrify America in the U.S.

Electrify America today announced plans to more than double its current electric vehicle charging infrastructure in the U.S. and Canada to a total of 1,800 fast charging stations with 10,000 charging points installed by 2025. The expansion will increase the deployment of 150 and 350 kW chargers – the fastest speed available today – and help pave the way for more electric vehicles in North America.

At the same time, the Group has secured new partnerships to provide European customers with convenient charging, i.e. with BP, Iberdrola and Enel."

The final element of the strategy is a comprehensive package of mobility solutions, mainly autonomous shuttle fleets.

"Mobility as a service and transport as a service, fully autonomous, will be an integral part of NEW AUTO. The value chain consists of four business areas: the self-driving system, its integration into vehicles, the fleet management and the mobility platform." 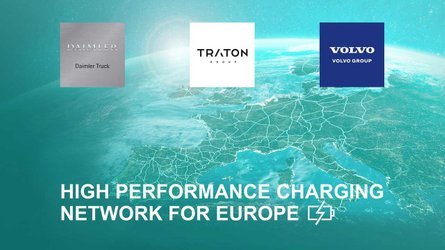 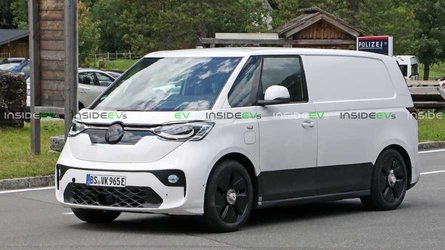 New Spy Photos Shed More Light On Volkswagen ID Buzz
By: Mark Kane
++
++
Got a tip for us? Email: tips@insideevs.com