Porsche doesn’t really offer too much visual differentiation between Taycan variants, which is what kits like this are for.

If you’ve specced several Taycans via Porsche’s official configurator, like I have, then you probably know there isn’t that much to set the base version apart visually from the top tier Turbo and Turbo S - the wheels provide the biggest difference. Tuners are speculating people’s desire to make their Taycan stand out, and are producing kits such as this one by Vivid Racing (VR).

It’s comprised of carbon parts for the car’s body, like a prominent front splitter with winglets on the end, matching side skirts, a diffuser in the rear and it’s all topped off by quite a big and aggressive looking ducktail spoiler (that looks like an actual Porsche design, harking back to the 1972 911 Carrera RS 2.7). The vehicle in these presentation photos is also lowered courtesy of some VR Performance lowering links and it rides on forged wheels also by VR (available in either 21- or 22-inch sizes).

We weren’t shown any photos of the inside, but the car features a custom steering wheel with carbon fiber inserts to continue the exterior theme. VR says development work on this kit (which costs $6,000, although you can just buy individual parts too) began over a year ago, before the company actually had a Taycan to work on, but eventually they did secure one from a local dealer and 3D scanned it in order to ensure their add-on parts would be a perfect fit.

This kit is not quite as extreme looking as some others we’ve seen. It’s not subtle either, but it definitely looks good, especially if you feel like the factory spec just doesn’t scream performance loudly enough. Let us know in the comments if you like this kit and if you would put it on your own Taycan. 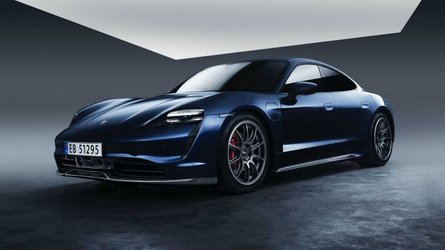 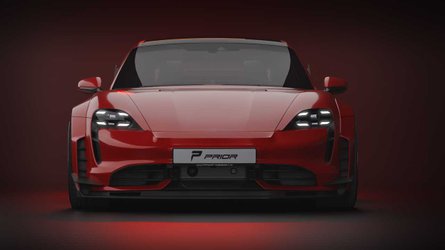