This is one of the coolest DIY classic car EV conversion projects that we currently know of.

The last time we checked out SuperfastMatt’s 1950 Jaguar EV conversion, he was trying to figure out how to mount the battery pack out of a Tesla Model 3 onto the old car’s frame. He didn’t manage to do it in the last video, but today work on mounting it progresses and now the pack is finally secured in between the chassis frame rails.

We really like how much thought and work is going into this build. For instance, after fastening the battery pack in place, Matt then runs an additional strengthening beam right through the middle of the pack and then mounts that to the frame, to not only improve structural rigidity, but also to have something to mount seats and other interior fittings to (so that they don’t lean on the battery itself).

Once he connects everything up and ensures it’s all solidly in place, he proceeds to build a case around the battery in order to make sure it is protected from the elements. As he points out, some people who use Tesla modules in EV conversions don’t really go through the trouble of doing this, but his goal is to try to mimic what Tesla does.

The moment of truth will obviously be when he powers the Tesla-Jag up for the first time, but that moment is still a few videos away, judging by the pace this conversion has had so far. Regardless, enough care, attention and research has gone into this build that we’re sure it’s going to turn out great. We can’t wait to see this pretty old Jag on the road again, zipping along with almost no sound.

Here's what happened previously on this project 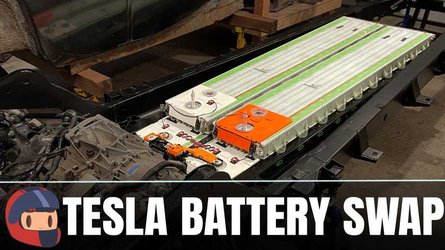 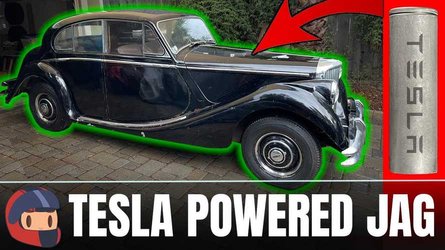