Half Of US States Have At Least 1,000 Charging Points

The U.S. electric car sales and infrastructure, just like the population, highly varies depending on state, but basically each region moves forward at its own speed.

According to the U.S. DOE’s Office of Energy Efficiency & Renewable Energy, as of March 2021, 25 states had at least 1,000 non-residential electric vehicle charging points (public and private), AC Level 2 or DC chargers (including Tesla Supercharging network).

In some markets, like California (the largest EV market), there were already some 37,000 charging points, while in 25 states there are less than 1,000. In Alaska, there are only 69 charging points.

We guess that in less populated, but large states, the share of DC chargers will be relatively high to address the need of long distance travel. 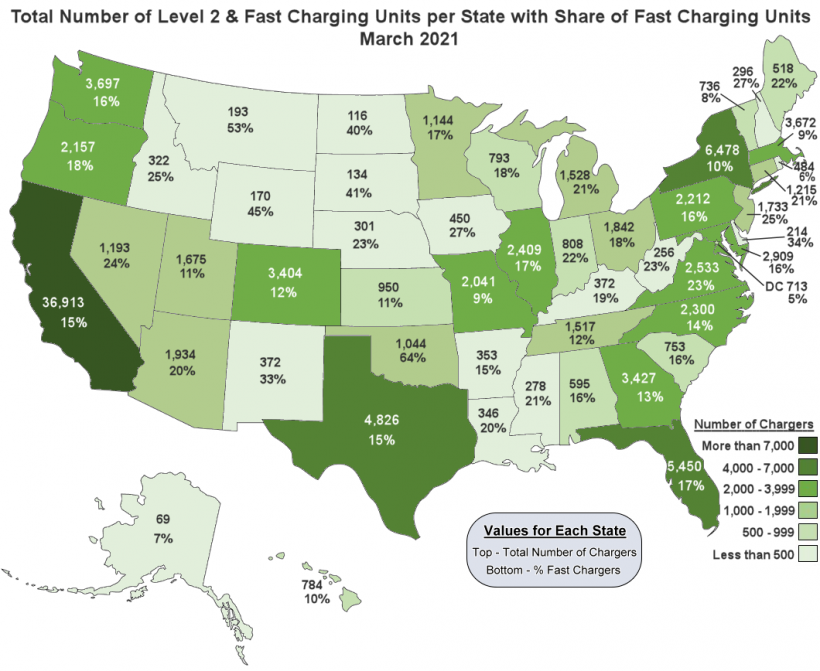 Of course, the number of charging points is not enough to say where the charging infrastructure is better, as it depends on the number of plug-in electric cars and density. Hopefully, we will see such a comparison as well in the future.

One thing is for sure, the charging infrastructure must grow probably 100x times or so to allow for a full switch from ICEs to BEVs.

US: Vermont Has The Most Charging Points Per Capita

"Note: Includes non-residential Level 2 and DC fast public and private chargers, and the Tesla network. Does not include Level 1 chargers or planned chargers.