Will Future Teslas Have Lasers For Wipers, Among Other Patented Innovations? 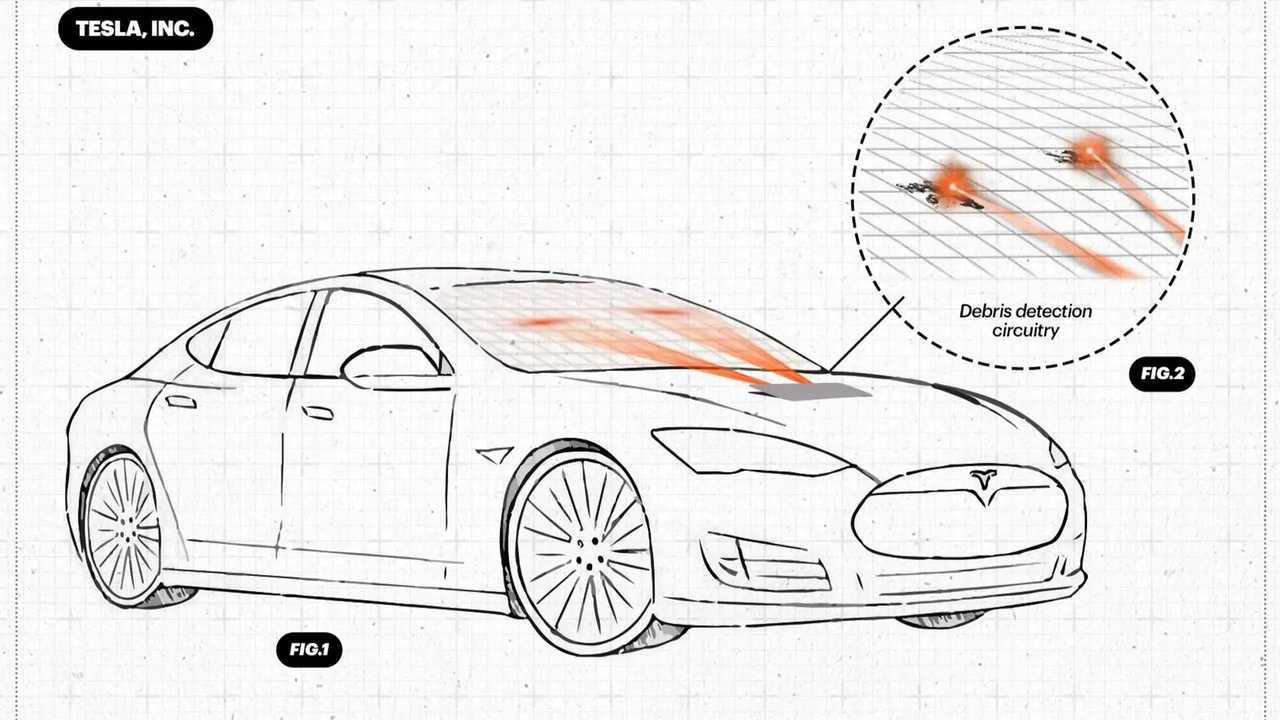 This article is about the five possible unusual innovations that you may see in a production Tesla in the not too distant future.

Tesla files a lot of patents, as do all manufacturers, but it doesn’t necessarily mean that a patent filing confirms a particular gadget will make it into production. Some of the ideas they want patented under their name seem like they are fit for a sci-fi flick, while others are more down to earth and the likelihood that they’ll reach production is higher. 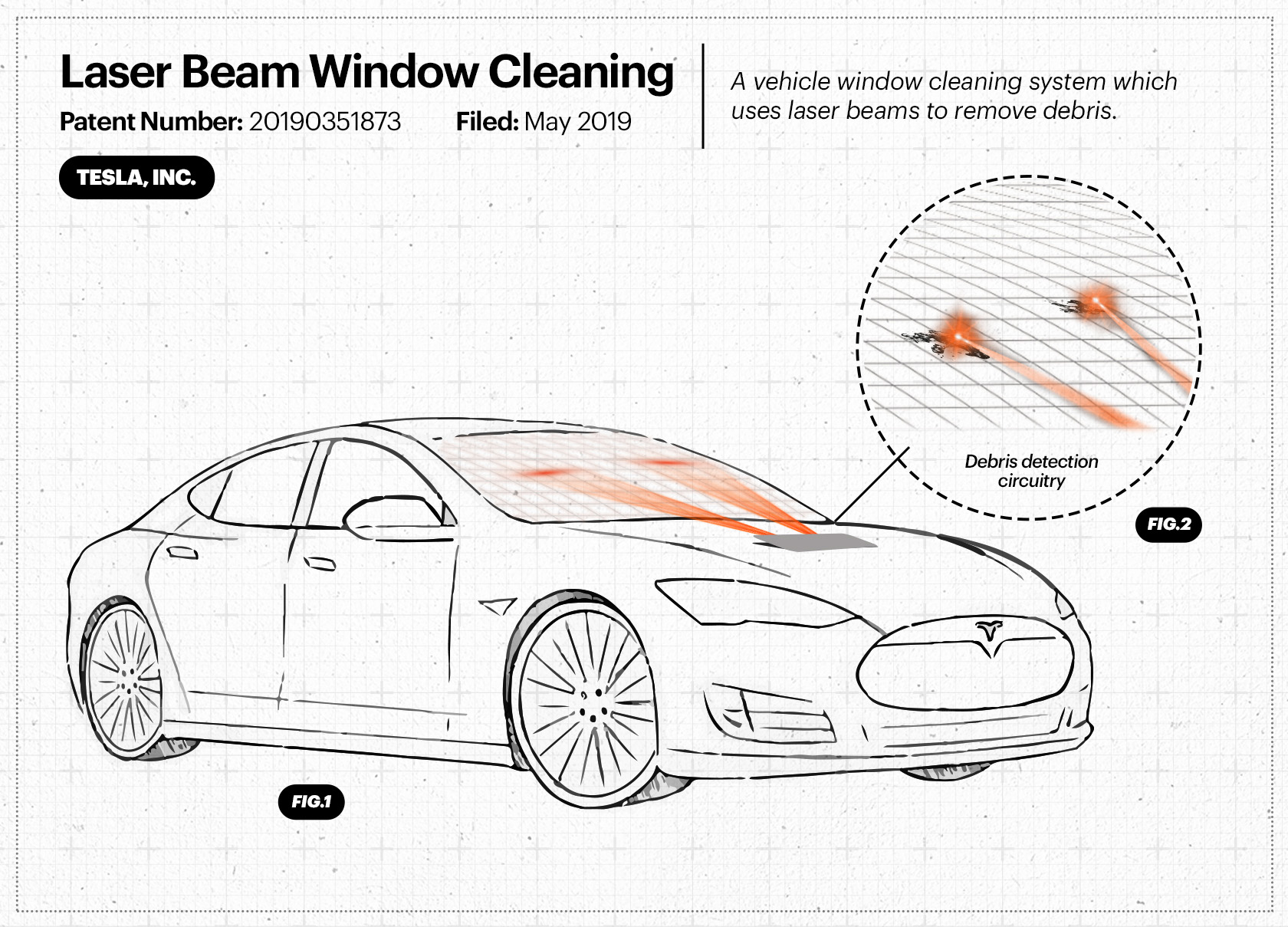 Which out of all these Tesla patents is the craziest? Well, that distinction has to go to what the manufacturer wants to replace windscreen wipers with - almost replace them, anyway, because the laser beams would actually just remove debris and dirt from the screen, and not so much keep raindrops off the screen so that the driver can see ahead.

So while this rather cool idea has been presented as a possible replacement for traditional wipers, Tesla is envisioning it more as a cleaning solution that would not only be used on glazed surfaces, but photovoltaic panels as well. We therefore could see both the lasers and physical wipers implemented on the same vehicle. 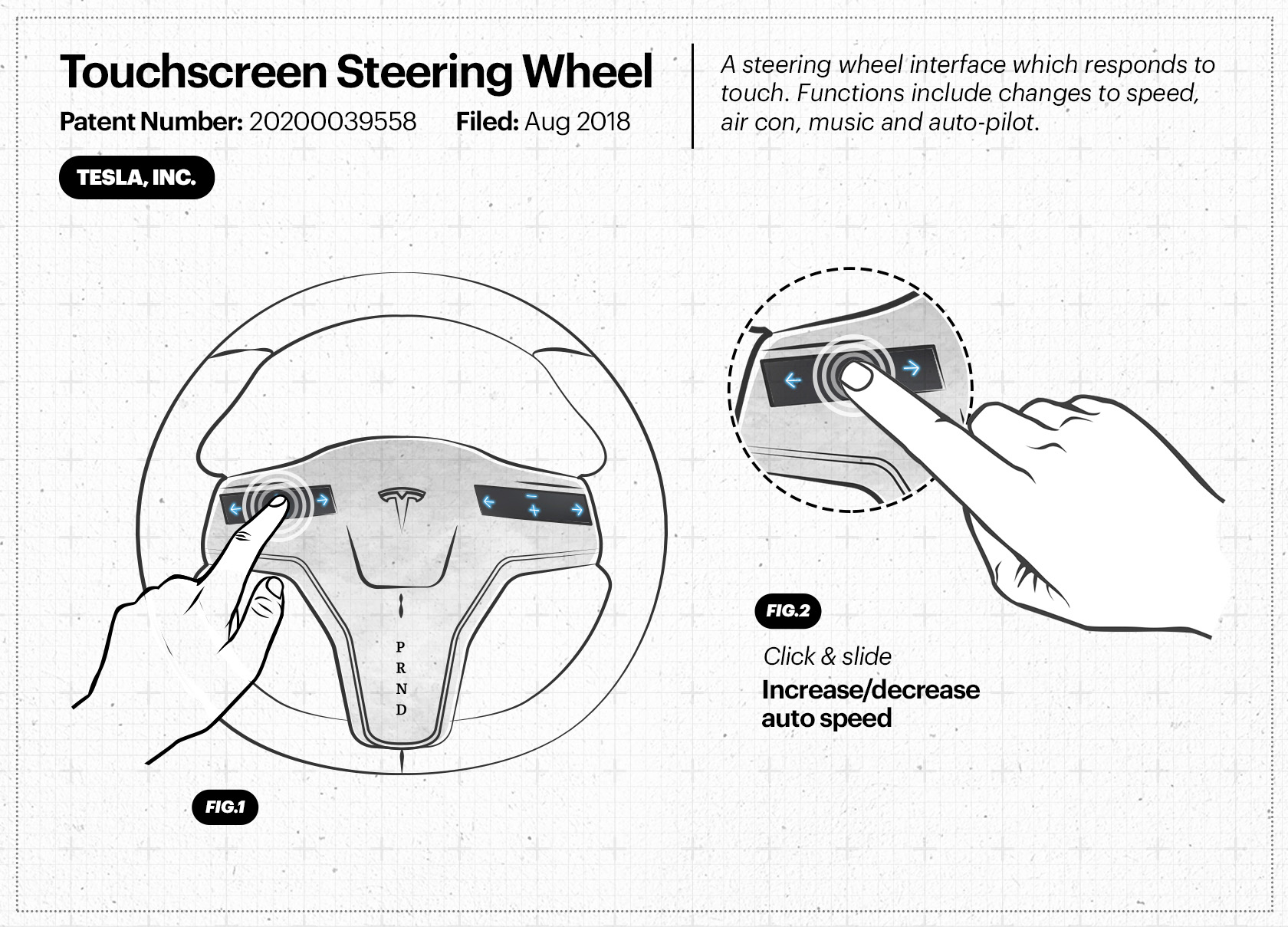 Next up is the steering wheel which will get touch-sensitive panels - they’re not touchscreens, as some have erroneously stated; they are a similar solution to what manufacturers like Mercedes-Benz are already offering on production vehicles. We’ve examined this particular patent filing in detail, if you want to check it out more thouroughly. 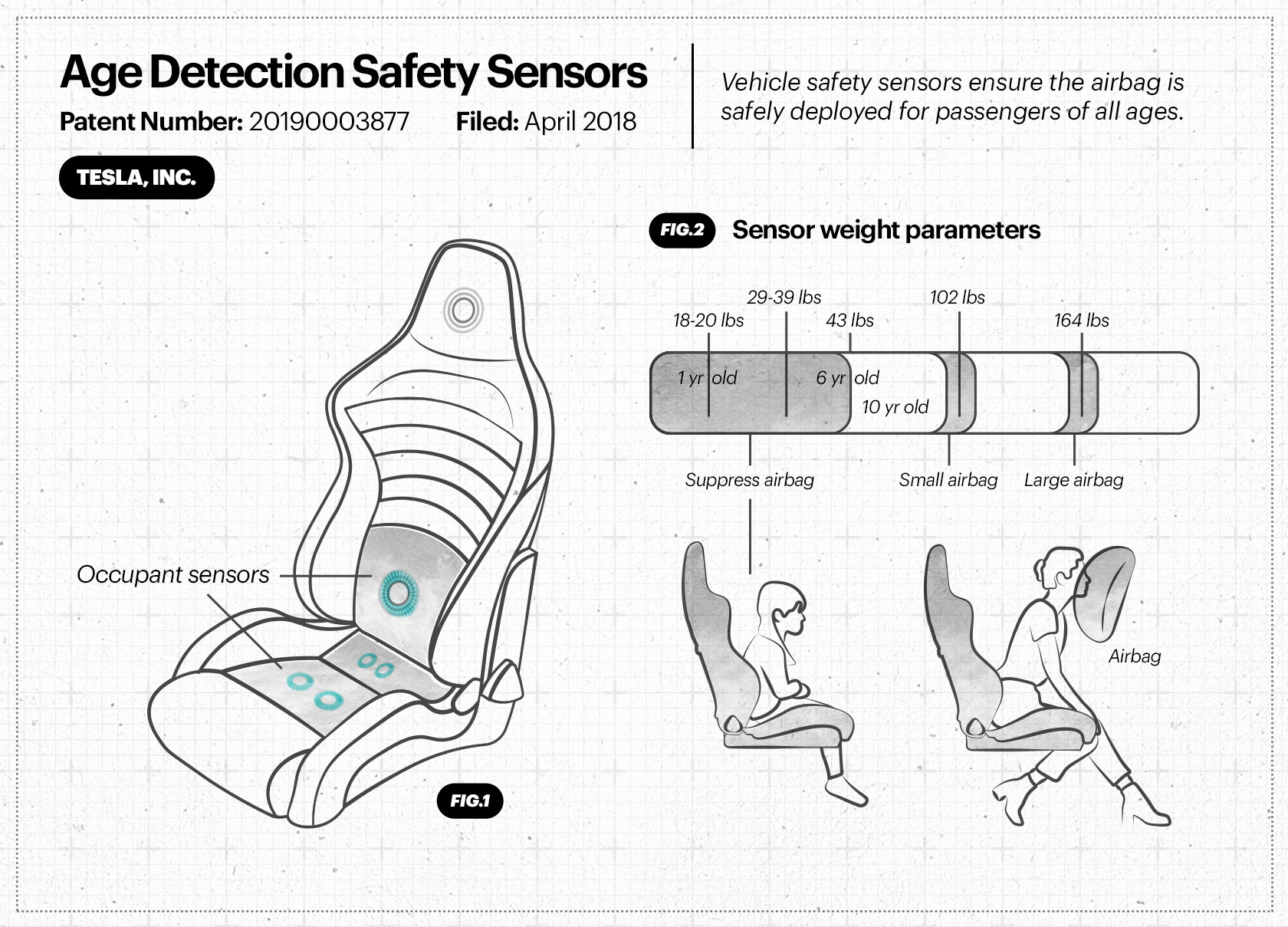 Another that is less talked about is for an age detection system that is built into the seats. Its goal is to approximate not only the age of the occupant, but also their rough size and weight. This is vital information in the event of a crash so that the car knows which airbags to deploy and how severely to deploy them. 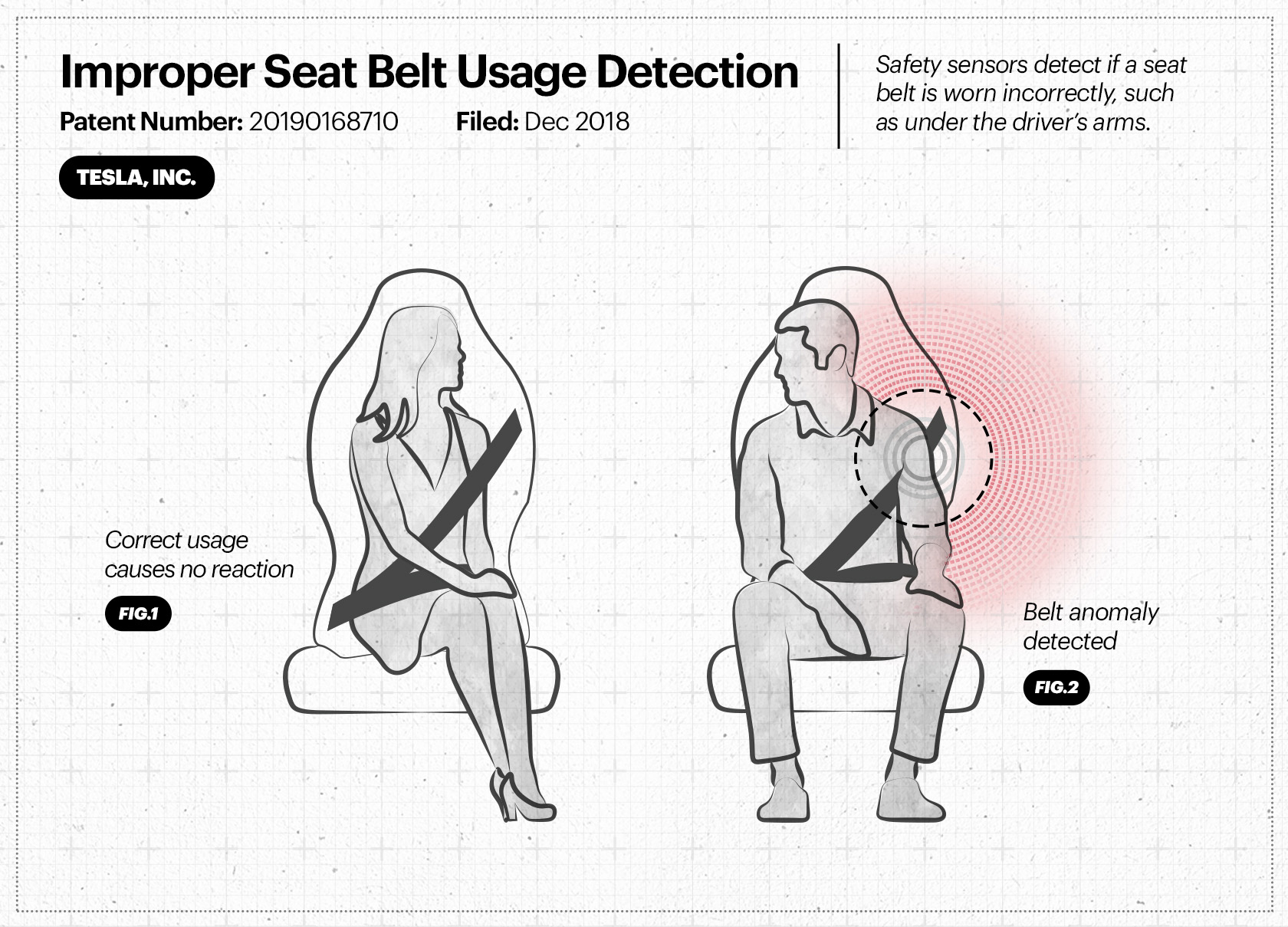 Tesla also wants the car to know if any occupants are improperly using the seat belt. Basically, this takes the seatbelt sensors that are already in all new cars to the next level. Through sensors, the car will know, for instance, if any of the passengers are not fully restrained by the belt (say, they have one arm over the belt) or if it’s just fastened to the seat and someone is basically just sitting on it. 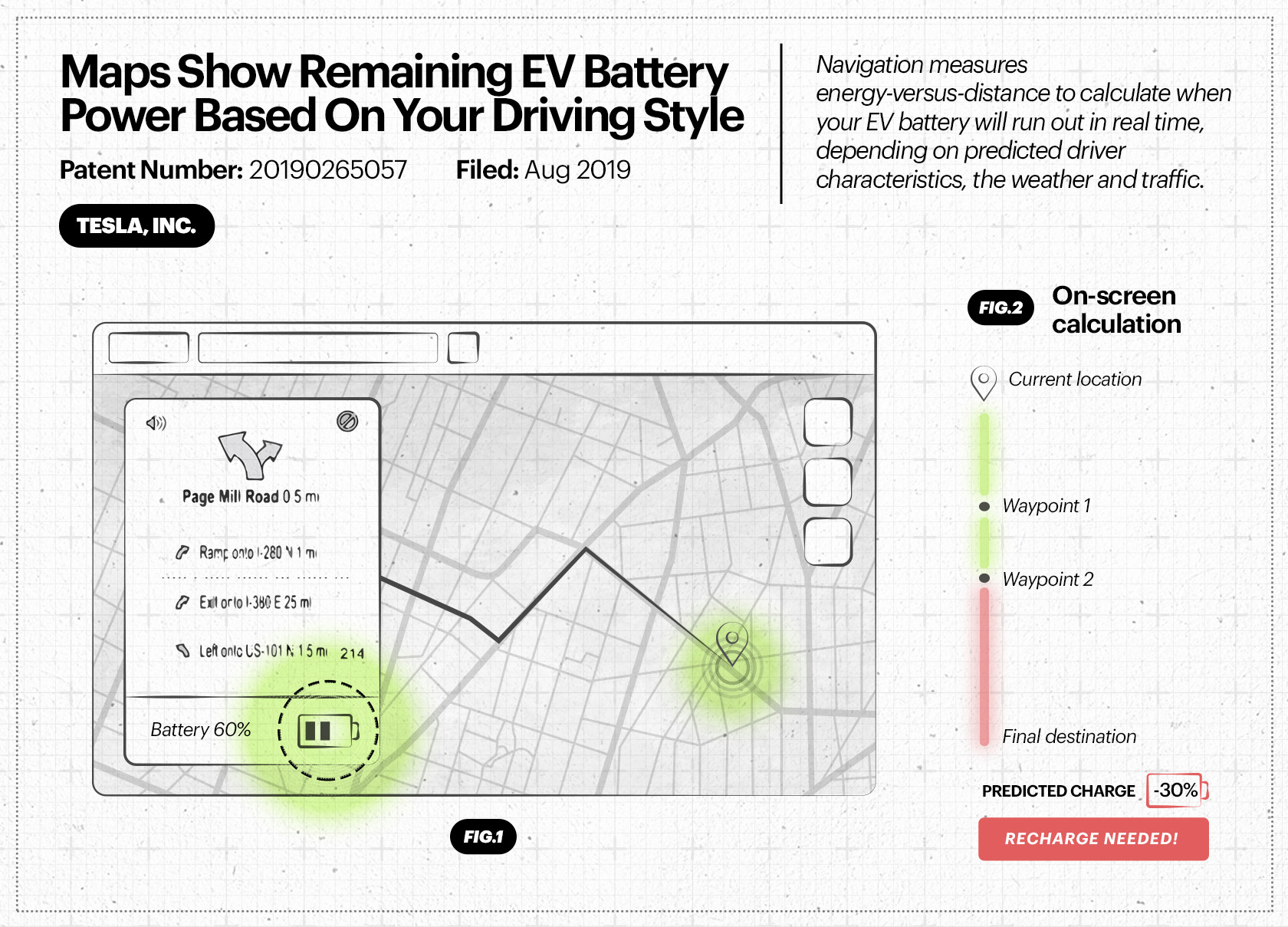 If you’ve ever driven electric vehicles, then you’ll know that their range predictions are often not accurate. Most of this inaccuracy is down to how the car is used and the inherently different energy consumption, which is why Tesla has filed a patent for a feature in the navigation system that ‘ measures energy-versus-distance to calculate when your EV will run out in real time, depending on predicted driver characteristics, the weather and traffic.’

Check out the latest Tesla news

Basically, the goal behind it is to give the driver a more accurate picture of how much range the car has at any given point. Similar solutions are already present in some EVs, although this one from Tesla will apparently be more advanced.