It's the first five digit monthly result in history.

Sweden is setting one record after another. In October, plug-in electric car sales increased nearly three-fold to over 10,000.

The Swedish market is focused mostly on plug-in hybrids, which are selling way better than all-electric. Without change, Volvo (S/V60 and XC60), Volkswagen Passat GTE and Kia Niro/Optima PHEV are in the top places year-to-date. Some of those top PHEVs noted 900-1,000 sales.

The top-selling BEVs in October were Polestar 2 (274) and Kia Niro EV (e-Niro) (235). The first BEV year-to-date is the Tesla Model 3, but October wasn't particularly strong. On the other hand, the all-new Volkswagen ID.3 noted 212 registrations, but is still outside the top 20 with 672 YTD. 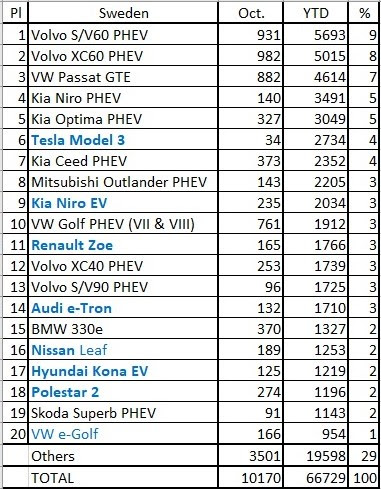