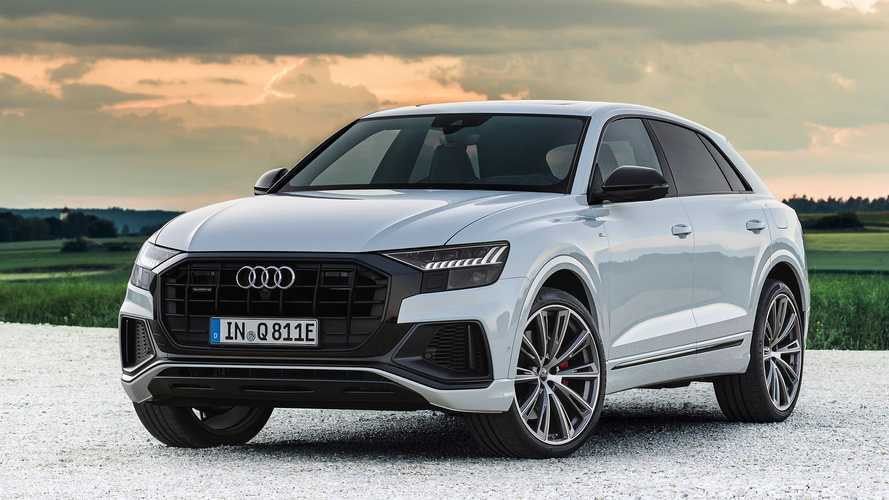 Only for Europe, at least for now.

The Audi RS Q8 is already on sale in the United States representing the company’s racing know-how implemented into a practical SUV. With 591 horsepower (441 kilowatts) and 590 pound-feet (800 Newton-meters) of torque, the sportiest Q8 is unmatched in terms of power but there’s a new hybrid version of the Q8 that gets pretty close to the range-topper.

Both use a powertrain that consists of two power units. The combustion engine is a 3.0-liter turbocharged TFSI V6 with 340 hp (250 kW) and 332 lb-ft (450 Nm) of torque. The unit meets Europe’s latest Euro 6 AP emissions standards and is supported by a permanently excited synchronous machine (PSM) electric motor and a 17.8-kWh lithium-ion battery pack.

Speaking of the battery, this is a new-generation package that has a 0.5 kWh larger capacity than its predecessor and is 88 pounds (40 kilograms) lighter. The previous version was introduced with the Q7 TFSI E Quattro, which is now also fitted with the battery of the latest generation.

Measured by Europe's WLTP cycle, the Q8 60 TFSI E Quattro can travel up to 28 miles (45 kilometers) at a single charge of the batteries. The more affordable version offers 29 miles (47 km) of autonomy between two charges.

At this point, the new Q8 PHEV will be available only in Europe with prices in Germany starting at €75,351 or $88,464 at the current exchange rates for the Q8 55 TFSI E Quattro. The more expensive and more powerful version gets the S line exterior package as standard, as well as LED headlights, adaptive air suspension sport, and 21-inch wheels.