Tesla Whirlwind Of Activity Descends Upon Germany Thanks To Elon Musk 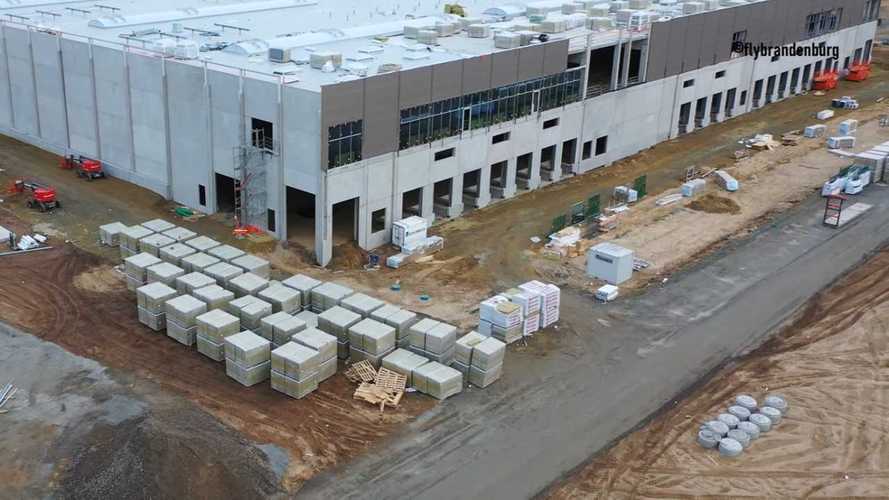 Tesla's goal is to solve problems, not create them.

Posted on EVANNEX on October 13, 2020 by Charles Morris

Tesla is famous not only for building quick cars, but for building factories quickly. One of the main reasons the company selected the Reno area as the site of Gigafactory 1 was that local officials promised to help get the facility built in record time. Tesla broke ground for Gigafactory 3 in Shanghai in January 2019, and started delivering Model 3s from the plant in December, a record for global automakers in China.

Above: Elon Musk at the site of the Berlin Gigafactory (Source: Tobias Lindh via Youtube)

Gigafactory 4, near Berlin, is likewise expected to be assembled at breakneck speed—Tesla hopes to be delivering vehicles by summer 2021. Is this a realistic expectation for Germany, a country that’s renowned for red and green tape and piles of paperwork? The nearby Berlin-Brandenburg Airport, which is getting ready to open this month, nine years behind schedule, doesn’t offer a promising example.

In a recent article in Der Spiegel, Markus Dettmer, Simon Hage und Michael Kröger explain how the California carmaker seems to be acting as a catalyst for Germany to streamline its notoriously complex and slow approval processes for new projects.

It doesn’t hurt to have the charismatic, headline-generating Elon Musk pushing the project along. In September, Musk got a lot of PR out of a short visit to Germany—he toured the Giga Berlin site, posed in a traditional German Zimmerman outfit, conducted an impromptu press conference in a parking lot, met with several local politicians, and joined VW Chair Herbert Diess for a test drive of the new ID.3 (which Musk pronounced “pretty good”). Musk even tweeted in German, “Please work at Tesla Giga Berlin! It’s going to be a ton of fun.”

The village of Grünheide, located near the Gigafactory site, is fairly rural, despite its proximity to Berlin. As in many such towns around the world, there’s tension between older residents who value the peace and quiet and business boosters who are eager to attract high-tech jobs. Residents and environmental groups have filed no less than 406 complaints with local government against the factory. However, most of the local leaders are welcoming Tesla to the area. Construction has already been underway for several months under preliminary permits, and local officials have been meeting weekly with the local Tesla team.

Evan Horetsky is the head of Tesla’s 100-member contingent in Grünheide. He also led the building of the Nevada and Shanghai Gigafactories, and says that he and his team have gotten “faster and better” each time. Horetsky told Der Spiegel that he takes the locals’ concerns seriously, and notes that the company went through a similarly complex process of approval when it built the Shanghai facility. “The difference to Germany is that here, the people who are directly affected can have their say, and who has more of a right to air their views than they do?”

Above: Elon Musk speaks with the press at the site of the Berlin Gigafactory (Source: Tobias Lindh via Youtube)

It may seem ironic that a “green” company is often challenged on environmental grounds, but it’s nothing new for Tesla, which has often fought green tape on its home ground in California. Germany’s eco-activists are by no means always supportive of technological solutions, but so far most seem to be optimistic about the advent of Tesla.

Axel Vogel, one of the founding members of the German Green Party, is now the state of Brandenburg’s Environment Minister. “From the very first moment, I saw Tesla setting up a site here as a great opportunity,” he says. “Finally, the German automotive industry is being warned.” As Vogel sees it, German automakers have pursued half measures such as diesels and plug-in hybrids for too long.

Could Tesla Really Start To Provide Power For Germany?

“Tesla’s declared goal is to solve problems, not create them,” says Vogel, adding that the company has met frequently with environmental organizations, and changed its plans to address their concerns. Tesla reduced the factory’s planned water consumption from 3 million cubic meters per year to 1.4 million. “That may sound like a lot at first,” says Vogel, “but we have individual farms that consume between 600,000 and 800,000 cubic meters per year.”

Above: Design rendering of the Berlin Gigafactory once it's completed (Source: Tesla)

“Tesla constantly optimizes the plant as it goes through the regulatory process,” says Jörg Steinback, a member of the center-left Social Democratic Party. “This leads to frequent changes in applications and also presents a major challenge for the authorities that must provide their approval.” Tesla has changed the design of the plant several times, and at one point the changes were so extensive that the company had to submit a completely new application for approval.