It comes as no surprise the Tesla Model 3 has the lead, but how are other EVs selling in each country?

In 2019, global electric vehicle sales reached 2.1 million. Figures are expected to rise sharply again toward the end of 2020. It could have been a stronger year thus far, however, the has made an impact. Thankfully, it's not as bad for the EV space than it is for autos in general.

Uswitch dives into the data to find out which all-electric models are most popular in various countries around the world. Tesla topped the list in 21 of the 60 countries analyzed. The Tesla Model 3 has the highest sales volume globally, and it's the top model purchased in a total of 19 countries. This also makes the U.S. the leader in the global automotive industry as a whole.

Uswitch highlighted a handful of other fully electric cars that performed well in its study, including the Nissan LEAF, Renault ZOE, BAIC EC Series, and Volkswagen e-Golf. With the Model 3 selling best in 19 countries, the LEAF follows with nine countries. Both the Zoe and EC-Series sell best in six countries, with the e-Golf grabbing three countries.

As you can see from the following chart, there are a few other EVs on the list as well. However, the chart ranks the data by brand, since a few brands sell electric vehicles other than those mentioned above. 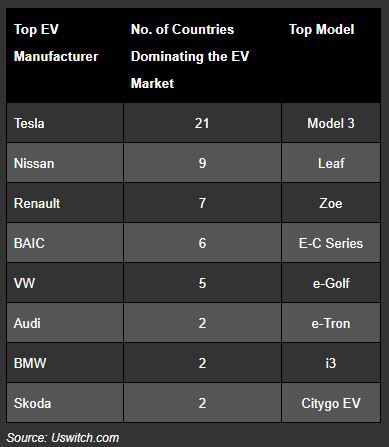 “The research reveals the Tesla Model 3 dominates the market in 19 countries - this may be due to the fact that it is the most affordable Tesla available on the market, but also comes with the autopilot system. It is also good to see other manufacturers such as Renault and Nissan gain success in the EV market in many countries, too.

She goes on to say that perhaps once more people begin to search for more energy-efficient cars, they'll realize the benefits of going electric. This could lead more automakers to move forward the EVs and eventually move into the tough African market. Broomfield reminds us that EVs are often much cheaper to own than gas cars. However, she says to make sure to do your homework about charging costs in your area.

Be sure to follow the source link to Uswitch. The article has an awesome interactive, color-coded world map (shown at the top of the page) that's worth checking out.