The time to beat has remained in place for a whopping eight years.

Hans-Henrik Thomsen pulled off an incredible 6.87-second 1/4-mile pass to break a record that has been in place for eight years. He was riding the custom-built Silver Lightning electric drag-racing motorcycle for Danish racing team True Cousins.

According to a report by Electrek, True Cousins set out to beat electric motorcycle racing records some 12 years ago. The team's first bike had only 12 kW of electric power. However, they've been working hard for years to improve their chances. The team's latest electric machine is 100 times more powerful, at a crazy 1,200 kW (1.2 Megawatts).

True Cousins' goal was to beat the 1/4-mile electric motorcycle record of 6.94 seconds, which was set in 2012 by Larry McBride. They had nine total runs to see if they could pull it off. With two-thirds of the runs in the books, it didn't look like they'd be able to beat the record. Their best time out of six total runs was 7.15 seconds. Ridiculously quick, but not quick enough.

Perhaps it took the threat of failure to really push True Cousins harder. The seventh run came in at a ludicrous 6.87 seconds. The top speed was recorded at 307 km/h (191 mph). Arguably more impressive is the Silver Lightning's 0-62-mph-time of less than one second. The bike covered 60 feet in just 1.09 seconds.

Check Out These Tesla Model 3 Performance Vs. Motorcycle Videos: 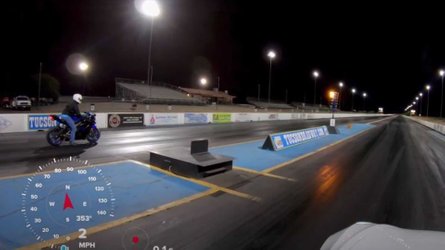 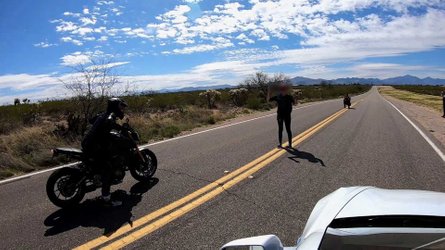 With just two runs left, it seemed the record was set in stone. However, the team was able to shave a tiny bit more time off the record with a time of 6.8697. That run proved a top speed of 195.4 mph.

Check out the video and then leave us your wisdom in the comment section below.