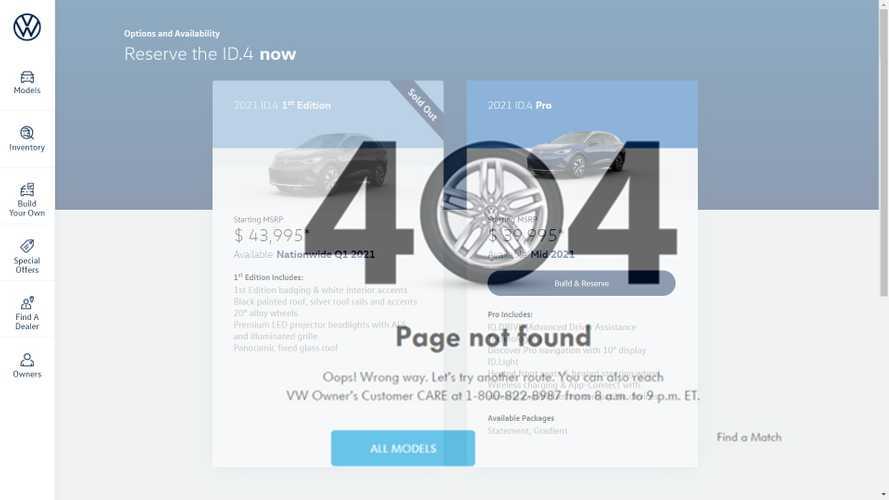 The German company was probably confident it would go well, but it did not.

People tend to believe that a car that has a huge demand is every automaker's dream, but that is not correct. It can also be a nightmare. Apart from having to control marked-up prices at dealers, there is always the danger that customers will buy from the competition instead. Volkswagen is facing that dilemma right now with the ID.4. After selling out its ID.4 1st edition, the reservation website for the new electric crossover crashed.

Volkswagen even tweeted about that. First, informing customers that they had broken the website and that the company was trying to put it back to work as soon as possible.

If you suspect that it is a marketing strategy, think again. A thread at VWIDTalk.com starts to report issues at the reservation website on September 23, at 11:21 AM. The car was officially revealed on that same day, at 11 AM.

It apparently took Volkswagen hours to realize that and to take action. As you can see, the tweet above was released at 4:48 PM on September 23. The company only said the problem was solved at 6:54 PM.

Some clients were not happy with Volkswagen's readiness for the event.

They are probably wondering if this sort of demand will not lead to the issues we mentioned at the beginning of this text and others, especially if the ID.4 will be sold in all 50 states by the more than 600 dealers Volkswagen has.

Volkswagen Sells Out Of ID.4 1ST For U.S. Within One Day
⠀

Again, it seems not even the German carmaker was very confident people would want to buy its EVs. Now that it saw demand would be higher than expected, what will the company do to solve that?  Whatever it is, we hope it to express more promptness than the company's reaction to the reservation site crash.