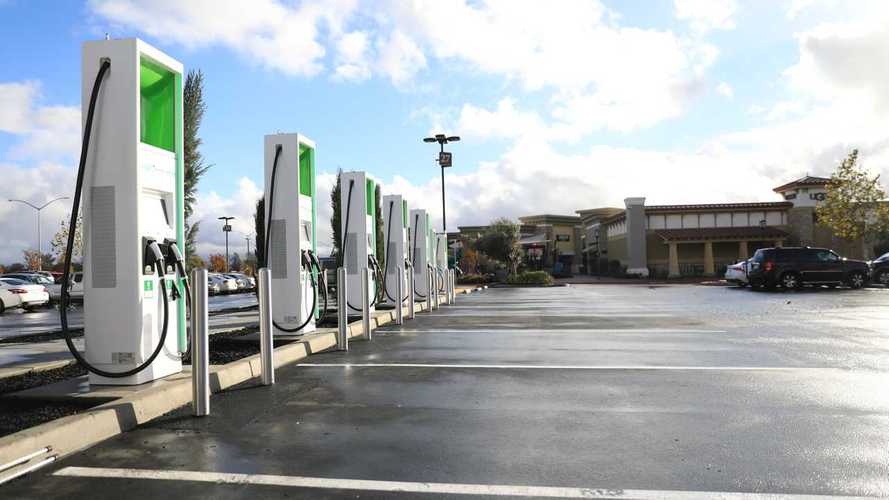 The new pricing means many users will pay less.

Electrify America has begun its transition to a pay-by-kWh based pricing scheme as of today. Four months ago we reported that this transition would happen, and Electrify America's President and CEO, Giovanni Palazzo promised us it would take place long before it was mandated in California. Today, he fulfilled that promise.

The departure from their current pay-by-time model was undoubtedly inspired by California's decision to require EV charging stations to charge according to the amount of energy given to the vehicle, and not by how long the car was connected to the charging station. The California legislation applies to all newly-installed Level 2 chargers beginning in 2021, and to new DC fast chargers beginning in 2023. Chargers installed before 2021 can continue to use time-based billing until 2031 (for Level 2 chargers) or 2033 (for DC fast chargers).

Electrify America's time-based pricing structure has been a point of contention for many of its users, and we've seen our fair share of complaints about it here in the comment section and in our EV forums.

Many people view kWh-based pricing as fairer, even though it doesn't always mean you'll pay less. Some owners of the faster-charging EVs could pay more under certain conditions, but owners of the slower-charging EVs should, in most instances, save money with the new pricing.

Palazzo explained that pay-by-kWh pricing takes effect in only 23 states plus the District of Columbia. That's because most of the other states won't allow kWh-based pricing since it's against the law for entities other than utilities to resell electricity. In those states, Electrify America will continue to sell "time" on their charging station.

However, Electrify America isn't forgetting those in the states where they cannot transition to kWh-based pricing and is revamping the pricing tiers and cost. The new pay-by-kWh pricing is as follows:

With Electrify America Pass Plus membership, customers will pay $0.31 per kWh. For those without the Pass Plus monthly subscription, which costs $4.00 per month, the cost jumps up to $0.43 per kWh. So basically, if you use the network at least once per month, it's most likely less expensive to subscribe to Pass Plus and pay the $4.00 monthly fee since the break-even point is only 33 kWh dispensed.

We're implementing the new pricing where we're allowed. The good news is, we are also creating a lot of awareness with the other states and I believe we're going to see some of those states following.- Giovanni Palazzo, President, and CEO of Electrify America

The network is also updating its time-based pricing. They are ditching the three-tier pricing scheme and replacing it with a much-simpler two-tier system. EV's that are capable of accepting up to 90 kW are in "Power Level One" and those that can accept more than 90 kW are now in "Power Level Two". Electrify America still offers two plans, Pass and Pass Plus. As before, Pass Plus members are charged a $4.00 per month fee and receive discounted rates.

The discount for Pass Plus members is now a flat 25%, regardless of if you are charging in a pay-by-time or a pay-by-kWh state. Additionally, Electrify America has eliminated the $1.00 session fee that Pass members had to pay for each charging session.

It will most likely be a process that takes many years to get all the states on board, knowing how government works. Heck, it's still illegal to pump your own gas in New Jersey where I live. Palazzo explained to me that it's ultimately their goal to have kWh-based pricing across the entire network, but it's going to take time.

The good news is that while the pay-by-kWh system is only taking effect in 23 states plus the District of Columbia, those states are responsible for more than 78% of use on the Electrify America network. Therefore only about 20% of current users will continue to be billed by time.

While this transition to a kWh-based price structure doesn't mean it will necessarily cost less, it does means that everyone will pay the same amount for the electricity, which is what many people had previously complained about. Quite often, the owners of the less expensive EVs paid more for their energy than those that owned higher-cost cars, which could charge faster. Therefore, those that couldn't afford more expensive electric vehicles felt like they were penalized, having to then pay more to charge them.