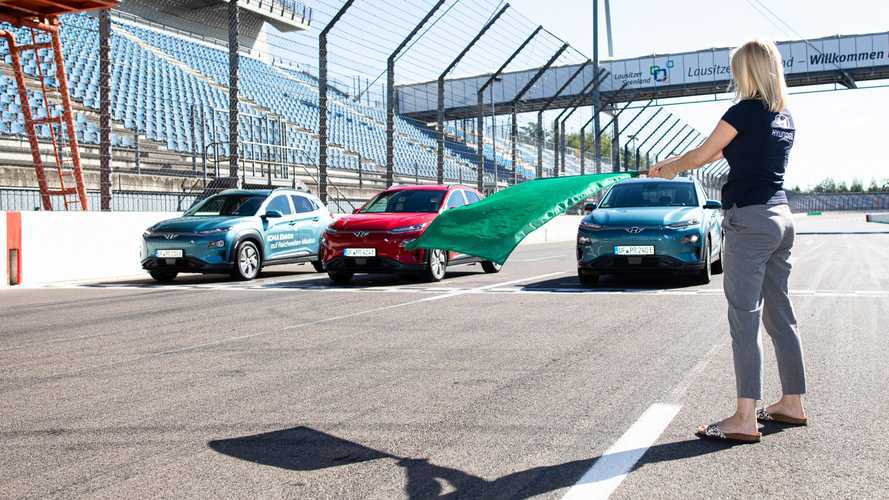 The result was achieved under controlled conditions, around a track, with hypermiling techniques applied.

Hyundai is the world’s first manufacturer to undertake an extreme range test to see just how far one of its EVs can travel on one charge. The EV here is the Kona Electric whose 64 kWh battery pack allows it to travel up tp 484 km (301 miles) based on the WLTP test cycle or 415 km (258 miles) according to the EPA.

However, even if these figures are not the easiest to match in real world driving conditions (especially the more optimistic WLTP rating), Hyundai took three Kona EVs and had drivers do laps of a circuit in Germany formerly known as Lausitzring, now called EuroSpeedway Lausitz) until they ran dry.

This track has a 3.2 km (2-mile) tri-oval (similar to Pocono Raceway’s in Pennsylvania) and it’s here where the cars were driven. It took three days and several drivers per car to finally bleed the Konas’ batteries completely dry and by that time all had exceeded the 1,000 km (620-mile) mark.

We conducted our own Kona EV range test

2020 Hyundai Kona Electric Impressions: What We Learned - Should You Buy It?

And to keep things competitive and maintain incentive throughout the test, the teams of drivers actually competed against each other to see who eeks more miles out of the Kona. The average speed recorded by the three cars was around 30 km/h (18.6 mph), all cars had their infotainment and all power-sapping gadgets (headlights and air conditioning included) switched off and outside temperature was about 29°C (84.2°F) on average.

The Hyundai Kona Electric boasts ample range, is highly efficient and rather affordable.