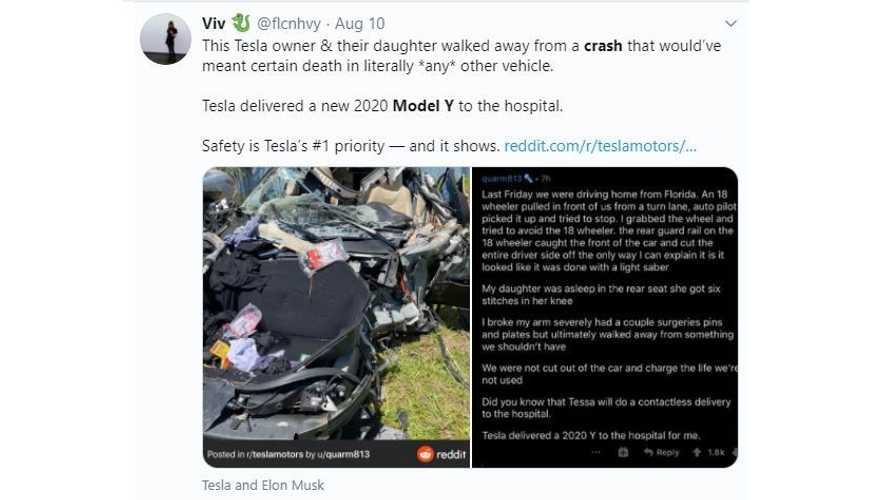 A semi-truck proceeded through the front windshield of a Tesla Model S, obliterating the car. The owner and his daughter are OK.

Reddit user u/quarm813 recently posted a story on the r/TeslaMotors subreddit. As you can see from the images, his Tesla Model S is obliterated. It was hit by a semi, which ended up sending the semi's bumper right through the Tesla's windshield. YouTuber Rich Rebuilds posted a comment and a brief video revealing the Tesla on Twitter.

According to the Model S owner:

"An 18 wheeler pulled in front of us from a turn lane, auto pilot picked it up and tried to stop. I grabbed the wheel and tried to avoid the 18 wheeler. the rear guard rail on the 18 wheeler caught the front of the car and cut the entire driver side off the only way I can explain it is it looked like it was done with a light saber"

The driver did sustain some injuries. He says he broke his arm "severely," which required some surgeries, pins, and plates. But otherwise, he walked away. Even better news, his daughter who was asleep in the back seat, only needed a few stitches in her leg.

Despite the condition of the car, there was no fire that we know of. In addition, the crew that responded to the scene didn't need to use the Jaws of Life or cut the occupants out of the vehicle.

To end the story on another positive note, the driver said Tesla delivered a brand-new Model Y to the hospital for him. It even did so with its new contactless method. Apparently, the Model S owner was already in the process of buying the new Tesla, and it just so happened the delivery took place at the hospital due to the circumstances.