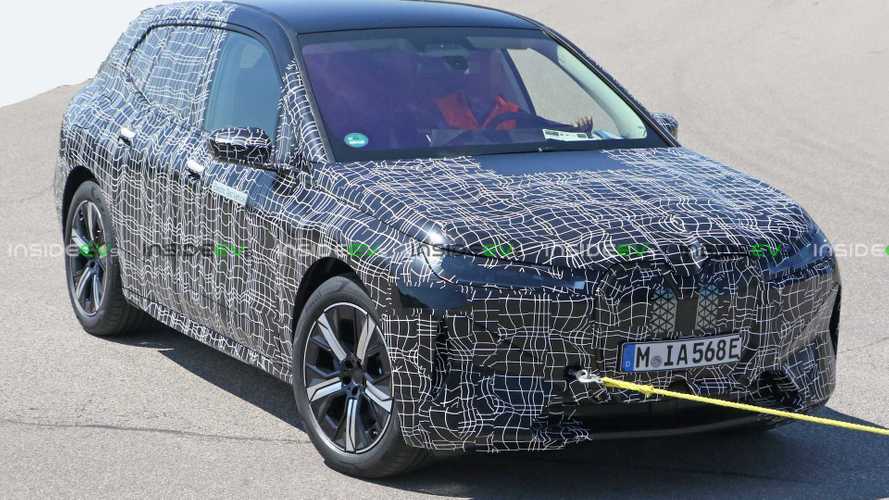 It looks like it’s wearing the production headlights, grille and aero wheels.

This is our best look yet at the car currently known as the BMW iNext, a model whose name will most likely change for production into iX5. If this is the first time you’re hearing of this model, it’s a sporty all-electric X5-sized high rider that’s set to debut next year.

It will be powered by BMW’s fifth-generation of electric powertrains which will provide up to 530 horsepower and draw from an 80 kWh battery pack. So it should be one of the faster electric high riders on the market; WLTP range is expected to be around 640 km / 400 miles on one charge.

Regarding its design, it looks like it’s a bit lower than BMW’s X3 and X5 models, it will have slender headlight clusters and a massive grille roughly the size of the one in the new 4 Series. In this latest set of spy shots, we also get to see its production rear lights for the first time too, although we can’t quite make out their shape through the camo.

The vehicle also has pop-out door handles, a lot of rear overhang (at least that’s what it looks like from some angles) and it looks like the side window line will feature a version of the trademark BMW Hofmeister kink. Our spies also pointed out that one of the prototypes they shot, believed to be Euro-spec, had Pirelli P Zero tires, while another (the vehicle shot already on the trailer, probably US-spec) had Bridgestone tires.

The iNext is BMW's most important upcoming EV

BMW will completely reveal the iNext (and its production name) in 2021 with several power outputs (both rear- and all-wheel drive) and plenty of new tech (most of the self driving stuff will be housed in the massive grille).