Check Out This Tesla Model S With A Rotary Engine: First EV Converted To Rotary? 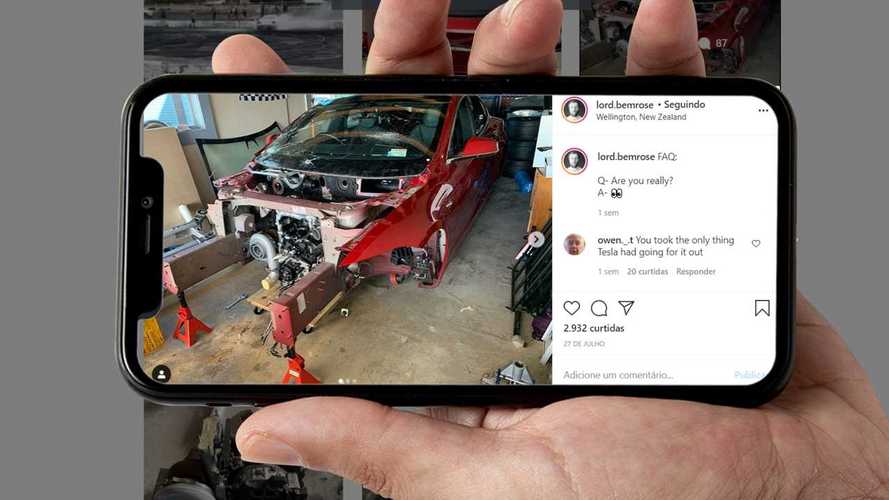 We are still trying to learn what Reuben Bemrose’s plans for it are.

This story began when Kyle Conner showed us a post from The Vehicle Finder on Facebook. No info, just images. Some of them just presented a Model S being apparently repaired, but then we saw the one you have above: the Tesla had an engine on its front axle. If you look closer, you’ll see it is a Mazda 13B rotary engine with a turbo helping it breathe. We had to find out more.

The guys at The Vehicle Finder were accommodating to point us in the right direction. The car is a work from Reuben Bemrose, a shop owner in New Zealand. R’s Garage once made headlines by putting a 13B on a Ferrari 456 body. There was a rumor that Ferrari threatened to sue him for that, but Bemrose denied this happened. He still has that sports car, apparently.

We have tried to contact him both in his personal Facebook profile and also on the garage page last August 2, but have not heard from him. His Instagram profile tells us a little more about the plans for this car.

From what this image shows, it seems that Bemrose bought the body of a Model S that suffered a front crash. In another Instagram post, he mentions that carrying it was “interesting,” as you can see below.

His Instagram description talks about his cars. Apart from the Ferrari, he also mentions a “17’ Tesla P100D 13BPT.” That’s undoubtedly his new project.

As soon as we saw the picture, we wondered if the idea is to make a range extender of some sort. Now that we know a little more about the guy behind the 13B conversion, we believe his goal is to create a fast combustion-engined car that looks like a Tesla.

If you know Bemrose, tell him we have sent him a message to learn more about the project. If it has no battery, as we are almost sure that is the case, our friends at Motor1.com would still be interested in talking about his future creation.