Mitsubishi Plug-In Car Sales In The U.S. Decreased In Q2 2020

Mitsubishi results for the second quarter of 2020 were significantly affected by the COVID-19 lockdown in the U.S., as the company reports 12,197 sales (down 58% year-over-year).

The brands' only plug-in model, the Mitsubishi Outlander PHEV, noted just 285 sales, which is 54% less than a year ago. Outlander PHEV share in overall volume amounted 2.3%.

The results are quite disappointing, especially in Canada, where Q2 sales hit just 413.

Renault-Nissan-Mitsubishi Alliance Will Go Leader-Follower Format
Mitsubishi Is Expected To Update Outlander PHEV In The U.S.

As we can see above, the results are weakening year-over-year, every quarter since launch.

After the first six months, Mitsubishi sold 632 plug-ins (down 49% year-over-year), while the cumulative result is 7,707.

It seems that the Japanese manufacturer did not succeed in the U.S. market as it did in Europe. First of all, the market launch of the Outlander PHEV was delayed by several years, and now the competition has caught up, with the launch of the new premium plug-in hybrid SUVs and all-electric SUVs, such as the Ford Escape PHEV and Toyota RAV4 Prime.

It appears the Japanese automaker may have missed its earlier opportunity, but perhaps Mitsubishi will return with next-generation PHEVs in the near future. 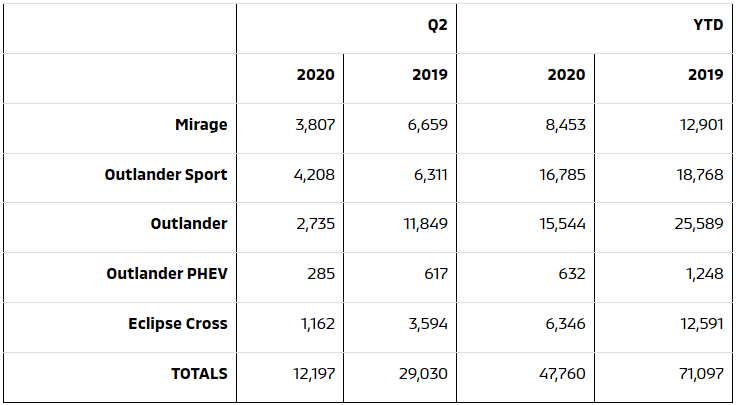