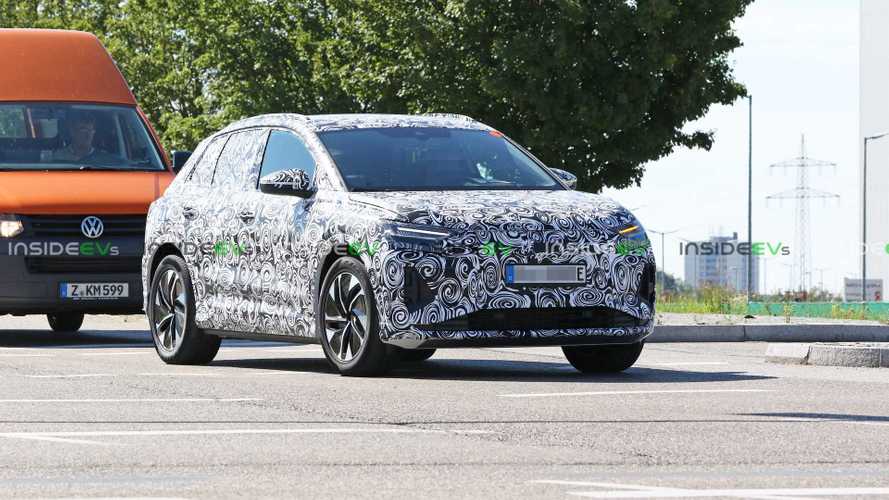 It looks like it’s production ready, but it’s hidden under psychedelic camouflage.

Audi will sell its own vehicle related to the VW ID.4, expected to be called the Q4 e-tron. The last time we saw a prototype example of this vehicle undergoing testing, it was actually sporting an ID.4 body, but now we get to see its production body, albeit still under confusing camouflage.

Changes from concept to production car seem minimal and predictable: this series model gains door handles, normal-sized side mirrors and other minor changes that tone down the look. Overall, it still looks basically the same, essentially like a shrunken down version of the larger e-tron SUV, but with a more prominent greenhouse part.

The Q4 e-tron concept was a hit in Geneva

Underneath it all, it still rides on the VW group MEB platform, but unlike the ID.4, which will be available in a two-wheel drive configuration, the Audi model will likely only be sold with a twin-motor all-wheel drive setup. If that is shared with the ID.4 too, it should have a combined output of 302 horsepower, ensuring a naught to sixty sprint time of around 6 seconds; top speed will be pegged at 180 km/h (112 mph).

It will draw electricity from an 82 kWh battery pack, offer fast charging capability at up to 125 kW, and a WLTP range of over 450 km (280 miles) on a single charge. It will also be more expensive than the ID.4, but this will be justified by the more posh badge, bolder styling and a fancier interior.

Expect to see it unveiled in its final production form before 2020 concludes and it should also enter production by the end of this year and reach showrooms in 2021; it will be built alongside other VW ID models, at the manufacturer’s Zwickau facility that has now been converted to only build electric vehicles.