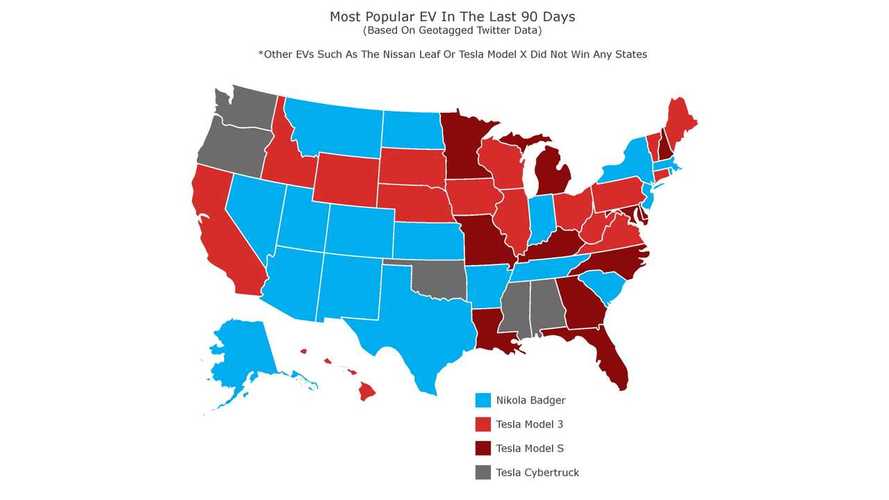 PartCatalog.com found out that the Badger leads conversations in 18 states.

The Nikola Badger will only start to be delivered in 2022, but it can be reserved since June 29. That could explain why it is currently the most discussed EV in the US, as analysis from PartCatalog.com discovered. The company analyzed geotagged Twitter data from the last 90 days and saw the Badger was the main topic on tweets in 18 states.

If you thought the Tesla Model Y would be the hottest subject around, you missed by 50 states. In other words, it can eventually become the best-selling Tesla ever, as Elon Musk predicted, but it is definitely not that brand’s car most people are talking about.

That title belongs to a surprisingly known vehicle, the Model 3. It was the car most people talked about in 16 states, which made the Badger victory a close call. For a vehicle that is in the market since 2017, that is surprising if you forget for a moment that it is Tesla’s most affordable product. In other words, it makes sense that people are talking about something they probably plan on buying.

If you did not look at the map above and took another chance at trying to guess which the third place would be, we can almost hear you saying Cybertruck. Not really: the third EV people were discussing on Twitter was the Model S. Produced since 2012, it may be a popular topic on 11 states for the same reason the Model 3 is also in the top rankings: money.

Used Model S units in the US can be very affordable. Rich Benoit was trying to sell one he recently recovered in an auction with a starting price of $2,000 to $3,000, but his video talking about that was removed from YouTube.

The fourth place belongs to the Cybertruck. It won in the 5 states left among the 50 in the US. Curiously, the Badger seems to have gone well precisely in the states where another PartCatalog.com analysis showed more people hated Tesla’s pickup truck. It is worth remembering the Badger will have a BEV version and an FCEV version, with more range.

Is it just a correlation? We cannot say for sure at this point, but it may mean truck lovers are not so much into diesel and gas as one would expect. They are probably willing to swap engines for motors, but other factors may play a role in their decision. We’ll have to wait for these electric pickup trucks to be for sale to know which they are.