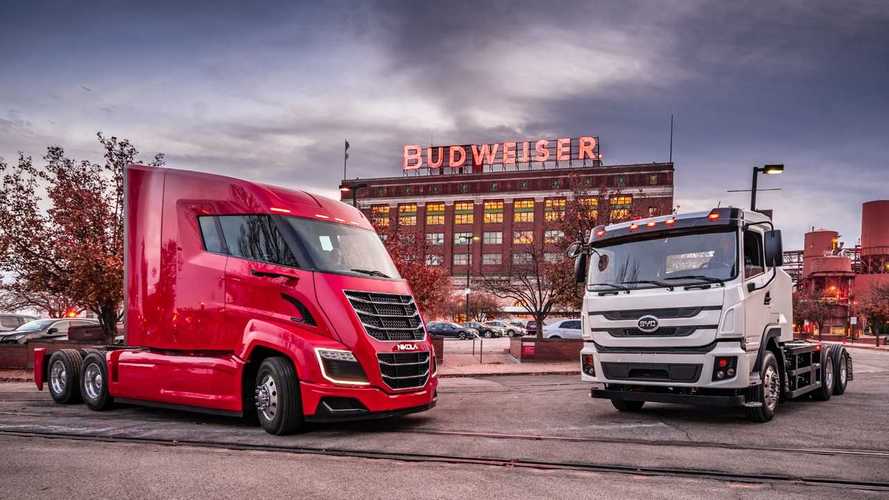 Trevor Milton addresses the points raised by Riley Penegor and our readers in another LinkedIn article.

Trevor Milton stated he believes Nikola will rule long hauls with its trucks in a LinkedIn article. He also said, at the beginning and the end of that text, that he does not believe FCEVs and BEVs compete. That was not enough to avoid harsh and groundless criticism. Luckily, it also raised an interesting discussion about what he said, based on arguments. Riley Penegor wrote another LinkedIn piece, and Milton addressed it at InsideEVs' request.

You can read Milton's and Penegor's articles by clicking on their names. Penegor is an Aerospace Engineering student at Iowa State University, and we used his piece as a source of valid arguments. Milton was kind enough to address them. We'll summarize the discussion point by point.

Penegor refuted that claiming that the cost per kWh is $0.134, as ElectricityLocal.com states. We searched for it, and the US Bureau of Labor Statistics says it was 0.199 in the Los Angeles area. ChooseEnergy.com says California is one of the most expensive states for electricity.

Here's what Milton had to say about that and the promise Elon Musk made of selling energy at Megachargers at $0.07, as some other readers reminded us:

“I am only stating what Tesla charges at the supercharger right now. If they could achieve $0.07 per kWh, why are they charging $0.26 per kWh? It is because the utilities dictate rate, not Tesla.

The problem is we are brokering deals now and this is not possible to do at $0.07 per kWh inside most cities and to hundreds of customer locations through California. There are ways you can cheat that number and spend your way to a lower rate in a few locations, but the issue is you would have to strike that rate with utilities all over CA. If it was possible, don't you think Tesla would do that for Supercharging now? Of course it is not possible. We have discussions with most utilities and if you start pulling megawatts out, your rate skyrockets.”

Penegor argues that Tesla charges that much to recover its investment on Superchargers quicker, while a use-intensive Megacharger could charge less to get its investments back. Milton did not discuss that.

Regardless, with kWh rates at $0.134 or $0.199, the obvious conclusion is that Tesla would have to sell energy at a loss to keep Musk's promise of $0.07 per kWh. Penegor also argued that the extra batteries needed to buffer the grid would not be an expense for the customers, but rather for the energy supplier. In the case of Megachargers, for Tesla. Here's what Milton had to say about these points:

“This is what I was referring to as buying your rate down. If you spend hundreds of millions on batteries driving your rate down, all you have done is misled your total costs. You can't lose money or spend capex in one area to claim you save money. Those are losses. You can, but it's just misleading investors to believe you are profitable when losing money everywhere else. In that case, we can do that too to make our numbers look even better. You have to bill the total cost of ownership to the vehicles you sell. You can't bill them as capex infrastructure that loses billions and then claim your energy rate is low. Anyone can finance losses.”

Another counterargument Penegor and many of our readers presented was that PPAs are not exclusive to Nikola. Check what Milton told us about that:

“Anyone can get a PPAs. But you can't just sign a document and... Bam! Your energy is there. You have to guarantee stable loads and take the energy when it goes into the grid. You have to pay huge fees if you don't take exactly what comes in the grid within so many minutes. PPAs are incrediMost customers that run hydrogen will run 700 -1,000 miles a day. Some are team drivers and some are not. You will see up to 240,000 miles a year on our h2 trucks. Your battery would be shot in less than 3 years with trying to compete with h2.bly complex. With battery trucks, it is impossible to pair the truck charging to the PPAs as trucks are all over the place. This is why you would have to install massive batteries to charge the batteries onboard the vehicle to utilize a PPA. It makes zero sense to do that as batteries degrade so quickly.”

This leads us to the next point.

Unless Tesla's million-mile batteries have addressed this, fast charging will lower battery lifespan. Milton says battery packs will degrade because of that: electric trucks with high ranges, of more than 400 miles, will depend on fast charging most of the time.

It is not a matter of how fast that can be done, but instead of how long a truck will be able to endure fast charging as its primary way of putting juice back in the battery pack. Penegor states Tesla is probably considering VCP (variable current profile) for the Megachargers.

In case it isn't, how will the company tackle the higher degradation rate to offer a competitive semi-truck?

Penegor also says most fleets won't turn a truck twice a day, as Milton states. The student claims most long-haul trucks will do 700 miles a day at maximum and that only multi-driver trucking would be able to achieve longer daily distances. Nikola's chairman refutes that.

“Most customers that run hydrogen will run 700 miles to 1,000 miles a day. Some are team drivers and some are not. You will see up to 240,000 miles a year on our H2 trucks. Your battery would be shot in less than 3 years with trying to compete with hydrogen.”

Penegor says a battery truck would be able to absorb energy from braking and that a fuel cell heavy vehicle would need a battery to do that, which would add "complexity, cost, and weight to the system." What he misses is that Nikola's trucks will have batteries. In 2016, the company spoke about a 320 kWh pack, but things have evolved, according to Milton.

“This was years ago and the powertrain has drastically changed since then. Our fuel cell uses a battery of less than 150 kWh. The battery acts as a buffer so it never has the demand to charge or discharge high C rates. It allows the battery to last a lot longer without needing fast charging. You don't have the plug that battery in.”

In his article, Nikola's founder said the fuel cell truck would weigh 10,000 lb less than an equivalent battery vehicle. Penegor claims he is wrong by doing a calculation that estimates the Tesla Semi will weigh around 20,000 lb, which would make Nikola's trucks unbelievably light, at 10,000 lb. But that is not the case, according to Milton.

“Right now, some contacts within Tesla are telling us that Tesla's 500 mile BEV is 27,000 lb and they are trying to figure a way to drop that weight. We are looking at 17,000 lbs for our hydrogen truck. Until Tesla comes out with weight, it is only a guess. Our BEV numbers suggest about that same weight for a pack that size.”

By "a pack that size", Milton means a 1.1 MWh battery pack, as he said these trucks would probably have. Penegor claims the Tesla Semi will have a smaller battery pack because the company managed to be very efficient, but that is something only Tesla could answer.

As we told some of our readers, what we have now are preliminary numbers. Only the production specs of all these new trucks will be able to answer which one will be better for long hauls. Whatever the outcome is, the good thing is that clean cargo transportation will have more than one option. Milton does not hide his disappointment with the turn the discussion took.

“The main point everyone misses because they stick their head in the sand and don't listen is: Whatever Tesla can do on the battery truck side, so can Nikola. We actually have a truck hitting the market sooner than they do. Battery competes against battery. Hydrogen competes against diesel long haul. Comparing them is nuts as they don't compete, they complement, but people want comparison so we will give it to them.”

We hope that soon applies to more than theoretical discussion.