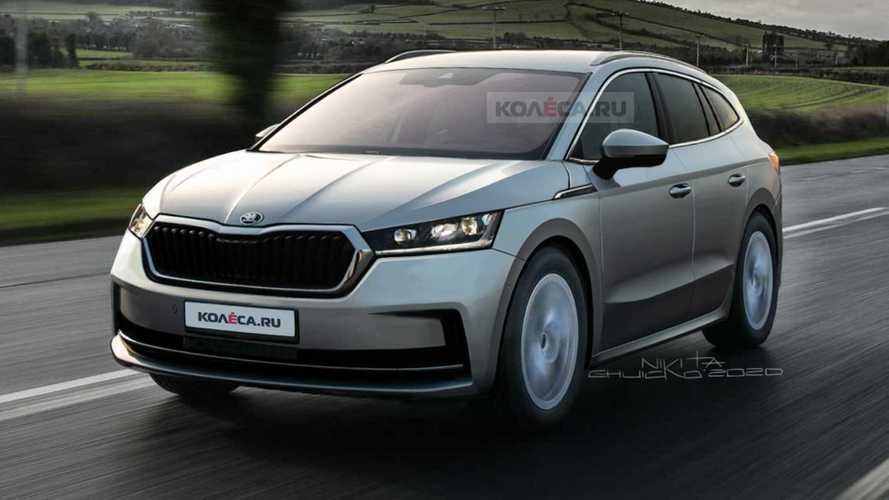 Skoda’s electric crossover rendered in all its subdued glory.

If you were expecting the production version of the first Skoda electric crossover to look like the Vision iV concept, then you will be really disappointed. While that is the study that previews the Enyaq iV, the actual series model is a lot more toned down and it doesn’t even have a coupe-like body with a sloping roof towards the rear.

The production Enyaq iV won’t necessarily be a head turning automobile with bold design and this rendering by Kolesa very accurately previews it. We got a chance to see the Enyaq both in the set of photos provided by Skoda, which showed a camouflaged pre-production prototype, and in the photos snapped by a car fan in the Czech Republic.

Those two were definitely the main sources for inspiration for the creation of this highly believable set of renderings. One design feature some of you may have wanted to see make its way from the concept onto the production model was the LED light bar that connects the two front headlight clusters.

However, even though we can’t exactly see under the camo to be sure, it won’t be a feature of the Enyaq that you will be able to buy. With that being said, this won’t be the kind of vehicle bought for its looks, but more for its space, practicality and decent range.

Furthermore, there will be a hotter RS model sitting at the top of the Enyaq iV range and that particular model will get some sporty design touches, both inside and out, for those who feel the need for that. The RS will also be the most powerful Enyaq, with a dual motor setup delivering in excess of 300 horsepower (the same powertrain that will be used by VW in its hot GTX-branded electric models).