The car market in Sweden shrunk by 38% year-over-year in April, but the plug-in electric car sales exceeded the 2019 result.

According to EV Sales Blog, The number of new passenger plug-in car registrations amounted to 4,270 (up some 40% from over 3,000 a year ago), which allowed achieving 23% market share.

After the first four months of 2020, total new registrations are 22,743 (27% of the total passenger car market in Sweden), but only 29% of them were all-electric. Customers clearly prefer PHEVs.

The top-selling models in Sweden are usually plug-in hybrids, and April was not an exception.

The top-selling models for the month and for the year are: 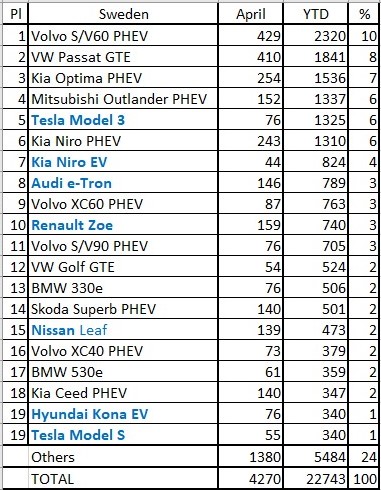