Ford Files Trademark For Fastor Charge: Is It A DC Fast-Charger Network?

It appears as though Ford will actually support its electric vehicles with a rollout of fast-charging stations.

This just in. Ford has filed a trademark for Fastor Charge. The trademark is connected to a fast-charging network similar to Tesla Superchargers.

We were tipped off about this breaking news by our friends over at MachEClub. The Ford Mustang Mach-E enthusiast site states:

A trademark filing at the U.S. Patent and Trademark Office (USPTO) has revealed Ford's intent to build a DC fast-charging network under the trademark "Fastor Charge." The filing also reveals a logo Ford plans to use. The status of the trademark is currently "published for opposition" and has not yet been approved by the USPTO. That means any member of the public who believes it may be damaged by the registration of the mark may file an opposition with the USPTO Trademark Trial and Appeal Board (TTAB).

Although Ford has partnered with Electrify America, IONITY, and Electrify Canada for the rollout of the new Ford Mustang Mach-E, Ford may be planning to build a fast-charging network of its own, perhaps to bring Level 3 charging capabilities to Ford and Lincoln dealerships or areas that will not be served by its existing charging partners.

The trademark filing, in part, can be seen below: 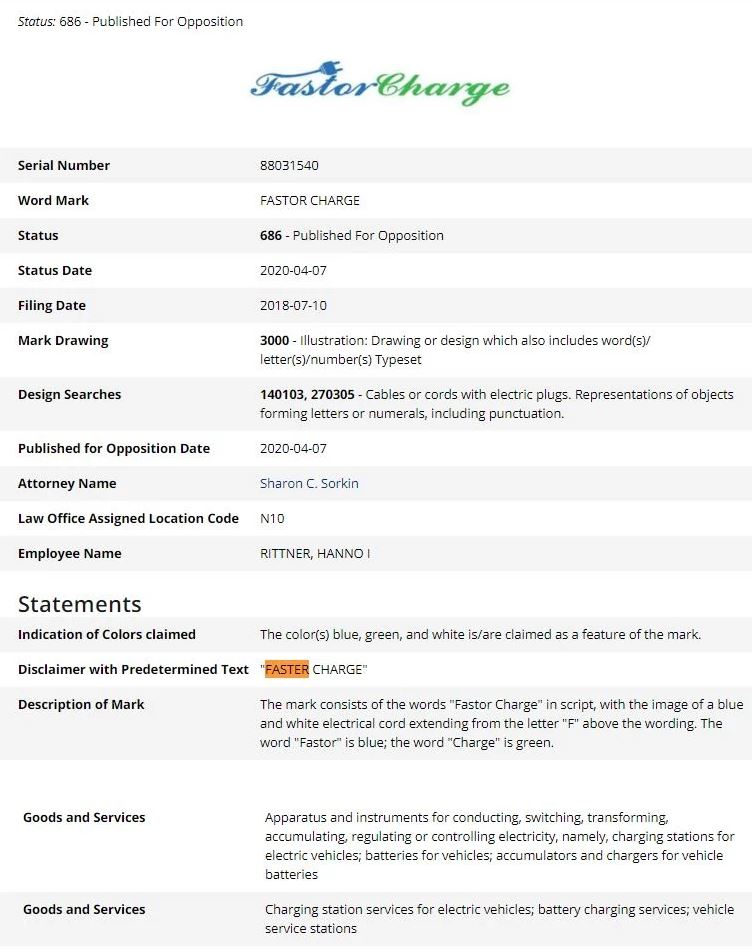 The logo looks a bit odd to us in that it has a very old-fashioned appearance to it. Additionally, there's nothing in the filing indicating that it's specifically related to fast-charging other than the Fastor Charge name and some mentions of chargers with building codes and construction listed in the filing.

We should point out that this was filed in 2018 and remains active, though it's listed as being published for opposition, which we believe implies that Ford is trying to see if this trademark is opposed by others of if it infringing on other work.

This is a developing story and we'll be sure to update it if we can confirm that it applies to a fast-charging netowrk.