In March, Tesla Model 3 Was Second Best-Selling Car In Portugal

At 15% share, plug-ins were doing relatively strong in March overall too.

The passenger car market in Portugal was significantly affected by COVID-19 in March, as the overall sales went down by 57% year-over-year. Fortunately, that's not the case (yet) for the plug-in segment.

The total number of new passenger plug-in car registrations was 1,610 (up 25% year-over-year) at a record 15% market share! Almost two-thirds of that were BEVs.

The sensation for March was the Tesla Model 3, which noted 514 new registrations (a volume delivery after two weaker months of the quarter). That's not only the best monthly result for a single plug-in model in Portugal ever, but the second-best result overall (just behind Mercedes-Benz A-Class - 553).

Because of the Model 3's surge, Nissan LEAF is now #2 for the year (490 total), but soon might be third, as Renault ZOE approaches quickly (432 total). 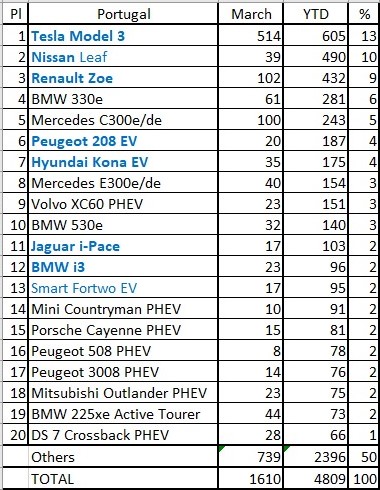 How Fast Does A 2021 Tesla Model 3 Charge? We Find Out
Rivian Vehicles Will Have The Option Of A Built-In Winch
Subaru Solterra Will Be The Brand’s First Electric Car
Sandy Munro Shares A New Image Of Tesla's 4680 Pack
Tesla Model 3: How Much Does It Actually Cost To Own?