Tesla Model 3 emerges as the best-selling plug-in model for the month and 4th for the year.

Sweden's appetite for plug-in electric cars does not cease to amaze us this year, as in March once again new records were set.

The total number of new passenger plug-in car registrations increased by 79% year-over-year to 7,794 (a new record). The market share was near-record at 28%.

Interestingly, as much as 39% of new plug-ins were BEVs. That's significantly more than on average during the first three months of 2020 (31%) - because of volume Tesla deliveries.

After the first three months, total new registrations were at 18,473 (28% of the total passenger car market in Sweden).

In March, Tesla Model 3 has become the top-selling model, thanks to 1,084 new registrations. That's not a normal rate for Tesla sales, but rather a volume delivery, often seen in the last month of a quarter. In March, the Model 3 jumped to 4th position YTD with 1,249 registrations, just off the podium.

The three top-selling models for the year are: 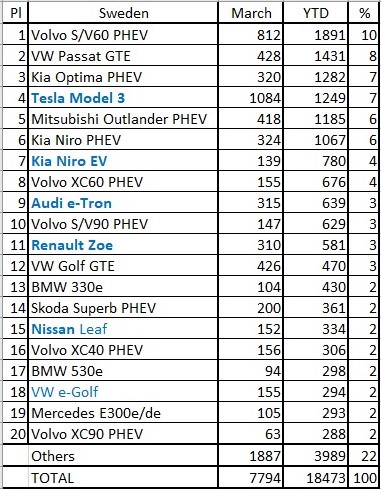