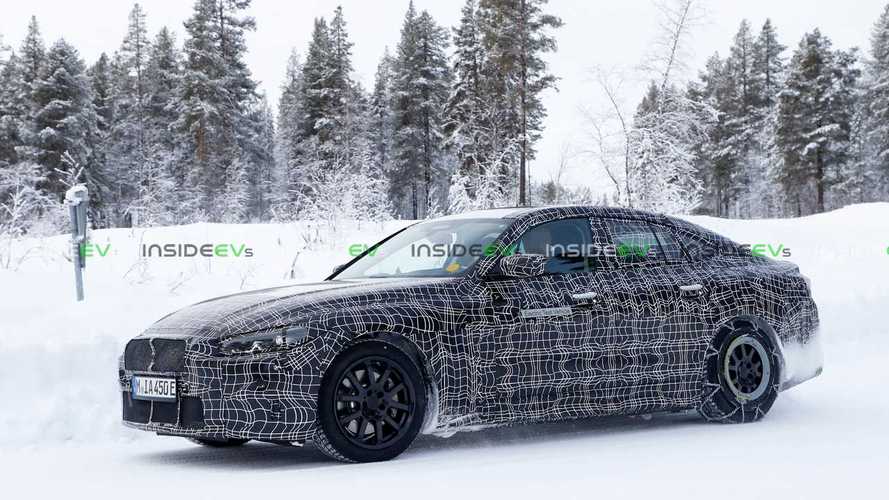 We'll finally get to see the real thing next week in Geneva.

Ahead of the BMW i4's world introduction at the Geneva Motor Show, we have some spy shots of one in Northern Sweden during cold-weather testing. BMW's upcoming i4 is an extremely important vehicle for the brand. It's basically their first serious swipe at the all-electric premium car segment, with conventional BMW styling.

We need to add the "conventional BMW" styling because BMW's first all-electric offering, the i3 was anything but. BMW never expected the i3 to be a high-volume offering, it was kind of like a science project for the brand as much as it was a car. Experimenting with the extensive use of carbon fiber, using recycled materials and reinventing the manufacturing process to create the most sustainably-built car available made the i3 extremely expensive for what it offered.

Therefore, BMW never expected i3 sales to be very high. That said, the i3 continues to march on, with sales gradually improving every year since its inception.

The i4 is different. In the i4, BMW has made what BMW loyalists have been asking for, an all-electric 5-seater with long-range and BMW performance. It's basically BMW's first real attempt to regain some of the market share they have lost to Tesla.

“With the fifth generation of eDrive, our vehicles will be able to drive 550 to 700 kilometers on electric power, depending on the model. We will achieve this in the BMW i4 and the iNEXT.” - BMW's previous CEO Harald Krueger

The i4 is rumored to have two battery options, an 80 kWh battery, and a 60 kWh entry-level option with the naming to be i4 80 and i4 60, respectively. The i4 will be available in rear-wheel and all-wheel drive versions and utilize BMW's "fifth-generation eDrive". BMW's previous CEO, Harold Krueger had stated that the i4 would be capable of driving up to 700 km per charge which is 434 miles. He obviously must be referring to the generous NEDC range rating, because an EV the size of the i4 with an 80 kWh battery pack will need to be very efficient to even get 300 miles per charge.

The production version of the i4 will have its global introduction next week at the Geneva Motor Show and we'll hopefully learn more about the powertrain and battery. For now, check out these i4 pictures recently taken while undergoing cold-weather testing in Northern Sweden.