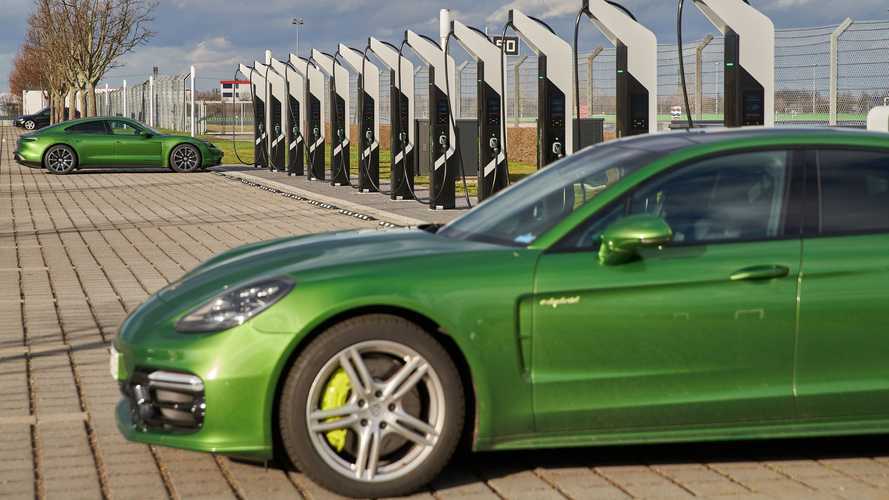 The future of EV charging looks brighter every day.

Electric car charging stations have been growing at an exponential rate. With every manufacturer planning to make the eventual transition towards electric vehicles, throwing up infrastructure has become a potentially lucrative investment. While the number of gas stations are declining, EV chargers continue to grow. EVAdoption points out that as of March 2019, there were over 63,000 level 2 and up charging stations in the US.

But the future of electric car charging stations isn’t just about quantity, there’s much to improve. For one, level two chargers are not ideal and have become quite dated. They provide just 70 miles of range in an hour. While fine for at home overnight charging, the speeds aren't convenient during travel. That’s where DC fast charging comes into play. They typically provide up to an 80% charge in just 20-30 minutes.

However, DC fast chargers, or level 3 chargers, vary greatly. There’s a lot to know and a lot we’ve already covered. There is no level 4 nameplate just yet so anything above level 2 speeds technically classifies as DC chargers. For example, Tesla’s Supercharger V2 and new V3 are both labeled the same yet V3 provides a 50% faster charge.

Currently, the easiest way to check the chargers potential speed would be through its specifications. A Tesla Supercharger V2 charges at 120 kW while V3 charges at 250 kW. Meanwhile, Electrify America is beginning to roll out 350 kW charging stations. Some companies are even working on 450 kW charging which, in theory, would be able to add 62 miles of range in just three minutes!

You must keep in mind that no vehicle is currently capable of charging at such speeds. These chargers are being rolled out in preparation for future technology. Porsche's Taycan claims to have the capability to charge at 270 kW from a 350 kw station.

In the future, we will see these fast charge stations take up every corner in America. Just about every upcoming electric car has the capability to use DC fast chargers so we'll see them implemented more as the EV industry weans itself away from level 2 chargers. There are currently ~10,000 DC fast-charge stations in the US and growing. Tesla is working non-stop in an effort to expand their proprietary 250 kW chargers.

These will continue to be used, primarily, for long-distance travel. Unlike gasoline vehicles, you can “fill up” your EV right at home. Using a standard 240v outlet, your car can be charged while you sleep, just like your phone. Instead of an outlet, if you’d like to charge a bit faster, you can simply install an EV charging station at home.

If you don’t already have an outlet installed, don’t worry, it’s easy. But in the future, it's possible that every home will have an available EV charging space. Cities are already attempting to implement regulations forcing new homes or even new parking lots to provide spaces to charge electric cars.

Robo-taxis and self-driving Ubers may sound like something straight out of a sci-fi movie but there are plenty of companies out there looking to make it a reality. In order to do so optimally, these cars need some sort of automated charging to coincide with other human-less tasks.

There have been a few concepts floating around throughout the years with a couple that seem to stand out. Volkswagen’s idea would be to have a robot bring a portable charger to designated parking spaces. This would allow for minimal infrastructure changes as the chargers would reside in a small, designated, area only moving when called away.

This method would be useful today in just about every parking garage. Rather than dedicating a few parking spots that can be ICE’d, you can park anywhere and the charger will just find you. Once finished, the charger would disconnect and move on to the next target. This could prove useful. Why? Currently, when your car is done charging, you need to return to your vehicle, get in, and move it in order to leave room for others waiting to charge. This can easily interrupt your meal or movie depending on where you're visiting.

Tesla’s solution appears to be a bit less complicated but occurs in a future with full self-driving. Using a "snake charger" of sorts the plug would find and connect to your car without any human intervention. And there's already a copycat idea being tested via a Dutch startup.

Tesla’s goal is to launch a robo-taxi network of driverless cars. Cars would leave a parking lot to pick up and drop off customers and find its way back to the chargers on its own. It’s definitely ambitious but according to Elon Musk, it’s just a few years away.

Once full self-driving is achieved, Tesla's snake chargers would also be useful for Tesla owners as well. Just imagine falling asleep in Miami and waking up in New York. Through this method, overnight road trips would be an ease and charging wouldn’t even be noticeable. I’d much prefer this versus another cramped airline flight.

This isn’t just concept art of what we imagine the world will look like in the next century, these are real innovations that companies today are working towards. Electric car ownership today will change as companies carve a new path with novel EV charging solutions for the future ahead.