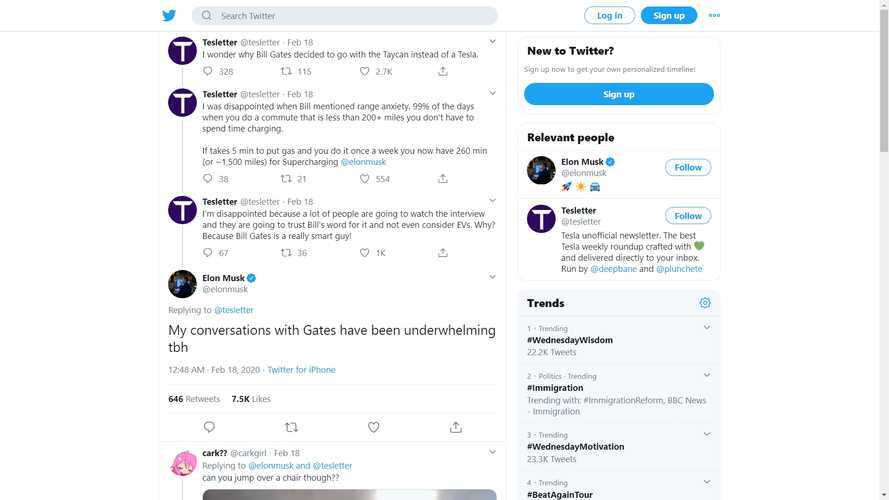 Musk says “my conversations with Gates have been underwhelming."

Bill Gates told Marques Brownlee he bought a Porsche Taycan and that he was very happy with the car. That was enough to trigger strong reactions from Tesla fans, some of which even made jokes about the first Taycan fire. Gates already drove Tesla vehicles, but the Porsche is his first EV. Tesletter decided to ask Elon Musk what he thought about that. His answer is in the image above. 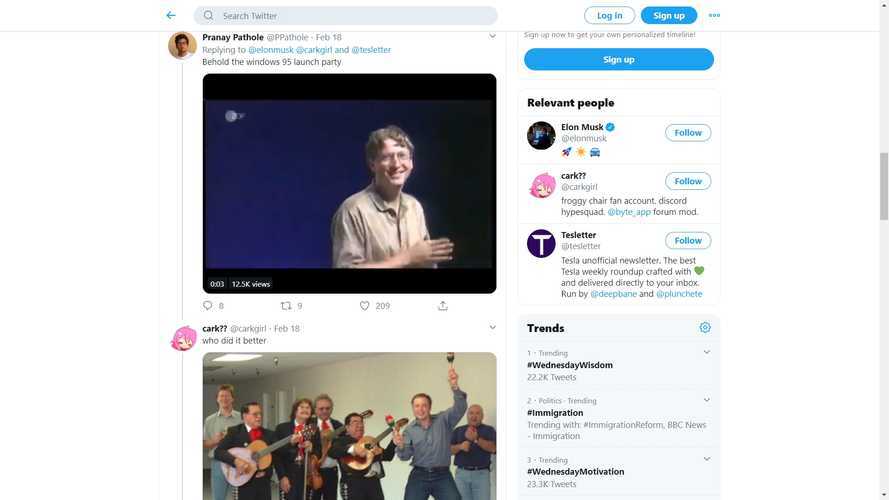 Jalopnik was the first to evaluate Musk’s words. Jason Torchinsky, the author of that text, classified that as “petulant.” Here’s the original tweet:

Bill Gates Tells Marques Brownlee He Got His First EV: A Taycan
⠀

When you run the biggest EV manufacturer in the world and someone decides to buy something from the competition, how should you respond when asked about that? Probably coherently with writing a text titled “All Our Patent Are Belong To You,” published on June 12, 2014. Musk said this:

“Given that annual new vehicle production is approaching 100 million per year and the global fleet is approximately 2 billion cars, it is impossible for Tesla to build electric cars fast enough to address the carbon crisis. By the same token, it means the market is enormous. Our true competition is not the small trickle of non-Tesla electric cars being produced, but rather the enormous flood of gasoline cars pouring out of the world’s factories every day.

We believe that Tesla, other companies making electric cars, and the world would all benefit from a common, rapidly-evolving technology platform.

Technology leadership is not defined by patents, which history has repeatedly shown to be small protection indeed against a determined competitor, but rather by the ability of a company to attract and motivate the world’s most talented engineers. We believe that applying the open-source philosophy to our patents will strengthen rather than diminish Tesla’s position in this regard.”

What changed in a little more than one year? Saying a conversation with anyone was “underwhelming” is the most euphemistic way of calling someone out. When you refer to one of the wealthiest men in the world due to his own work, petulant can also be considered a euphemism.

Instead of confirming that impression, Musk preferred to suggest that the only impressive thing he saw Gates doing was jumping a chair after one of his followers dropped that joke. In other words, he fed the diaspora.

We have written about how sad it is to see the EV world divide into fan clubs. After these tweets, they will probably feel even more encouraged to do that and follow their leader.

We miss the 2014 Musk. We’d like to see the current one apologize for that tweet. Isn’t it nice that Gates bought an EV, whatever it is? With his foundation, Gates could fund research for a faster EV adoption. He is also dedicated to fighting climate change.

Musk could write a new article about how it would be nice to see more manufacturers produce desirable EVs to make Bob Lutz’s prediction of 15 percent of world market share in 2030 seem shy. Will we see that, or is Tesla now confident it can sell all the EVs in the world? Giga Berlin, Giga Texas, and Giga Criciúma will have to be really big...