Tesla Denies Unintended Acceleration: Check Who Made The Petition 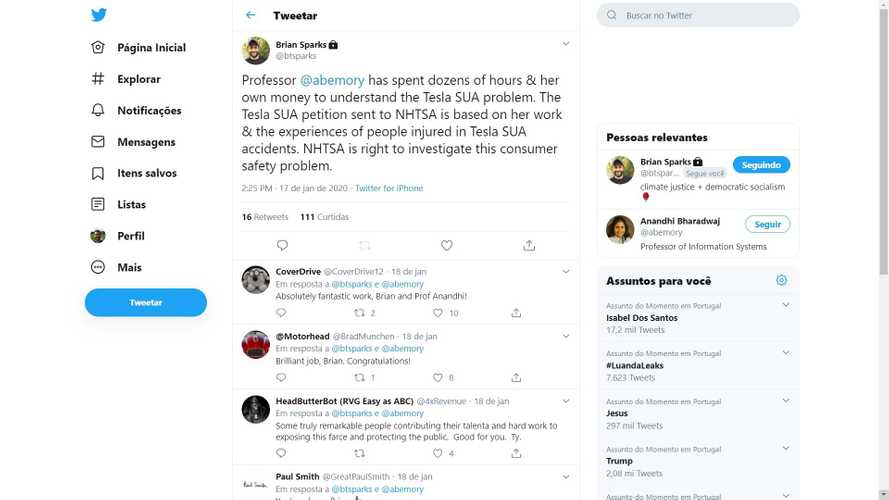 Know more about Brian Sparks and Anandhi Bharadwaj, who would have performed the research for the petition.

Tesla spoke up about the petition about SUA – Sudden Unintended Acceleration – incidents. Not in a traditional fashion, but solely in its official blog. According to the manufacturer, there is no such thing as “unintended acceleration” in its cars. The company also accuses Brian Sparks, the petition author, of being a short-seller.

When we first wrote about this – clarifying that there is no investigation going so far – we did not know who Brian Sparks was. After he approved our request to follow him on Twitter, it was clear that the man that defines himself there with “climate justice + democratic socialism” is the one behind the document.

In a recent tweet, he identified Anandhi Bharadwaj as a sort of co-author. She is a professor of Information Systems at Emory University and would have had an “unintended acceleration” episode with her 2018 Tesla Model 3. Sparks does not seem to be a Tesla owner.

We have contacted both of them to get some answers to what led them to write the petition. From Sparks, we would like to know why he got involved with this. From Bharadwaj, if she was the one reviewing all the NHTSA complaints to select the SUA cases. None of them replied to our contact requests so far. Anyway, their tweets clearly show they have joined efforts to create the document.

Bharadwaj has only a few tweets mentioning Tesla or its case. Sparks has many more, as you can see in the gallery above. His Tweeter profile is only available to the people that are approved to follow him, as we mentioned before.

We went through his tweets, and the very first on this account dates from May 2, 2019. You can see it already referred to Tesla.

We have no idea if he is a Tesla short-seller, but he surely has close ties with them, tweeting and praising what they do. Some attack Elon Musk or Tesla for “a history of dishonesty.”

As he did not respond to our interview request, we tried to find out more about who he is or what he does for a living. He is said to be a member of the “Respect Berkeley” protest group, and he seems to dedicate his life to protests. In one tweet, he asks the Tesla case to end soon so that he can go after PG&E.

The question is that he was not after Tesla solely for the unintended acceleration issues. He names a lot more problems.

Phantom braking and cracked suspensions are among his concerns, but another focus is Autopilot, which he believes is a hazardous device.

He even asks for Ralph Nader’s help at some point. Nader apparently never answered.

Sparks did not concentrate on the issues consumers are having, such as the update that affected batteries. He also seemed to inspect Tesla’s parking lots, production issues, employee complaints, and a long, etc. Summing up, he was all over the company until he focused on the unintended acceleration cases.

Whatever the reason he has for making the petition, there is indeed a high number of people complaining about the issue, most of them after braking. If approved, a formal investigation would help shed light on what is happening with all these people. As Sparks points out, if 100 percent of the incidents are related to improper operation, we may be talking about something Tesla would also better tackle.

This is Tesla’s official response to the petition, which you can also read at the company’s blog.

“There is no ‘unintended acceleration’ in Tesla vehicles

This petition is completely false and was brought by a Tesla short-seller. We investigate every single incident where the driver alleges to us that their vehicle accelerated contrary to their input, and in every case where we had the vehicle's data, we confirmed that the car operated as designed. In other words, the car accelerates if, and only if, the driver told it to do so, and it slows or stops when the driver applies the brake.

We are transparent with NHTSA, and routinely review customer complaints of unintended acceleration with them. Over the past several years, we discussed with NHTSA the majority of the complaints alleged in the petition. In every case we reviewed with them, the data proved the vehicle functioned properly.”

As you can see, Tesla mentions the accelerator pedals in their cars have “two independent position sensors.” We would like the company to be more specific about what that means. Would it be a sensor for the potentiometer the pedal activates, and another one for the physical position of the pedal itself?

Tesla also seems to address a concern we expressed in our previous text regarding transparency. It says it is “transparent with NHTSA” and that all cases it has reviewed with the agency proved “proved the vehicle functioned properly.”

If that is correct, NHTSA will archive the petition. If that is not true, we’ll see the investigation start with a preliminary evaluation. It will be similar to the one the agency has begun for the update that restricted range and supercharging speeds.

Sparks is already aware of Tesla’s response and answered with what appears to be quite some irony.

Will we learn why so many people are complaining of unintended acceleration in Tesla vehicles? Are they coming only from people that cannot admit they made a mistake, or are there valid reports of an issue with these EVs? The ball is now in NHTSA’s court.