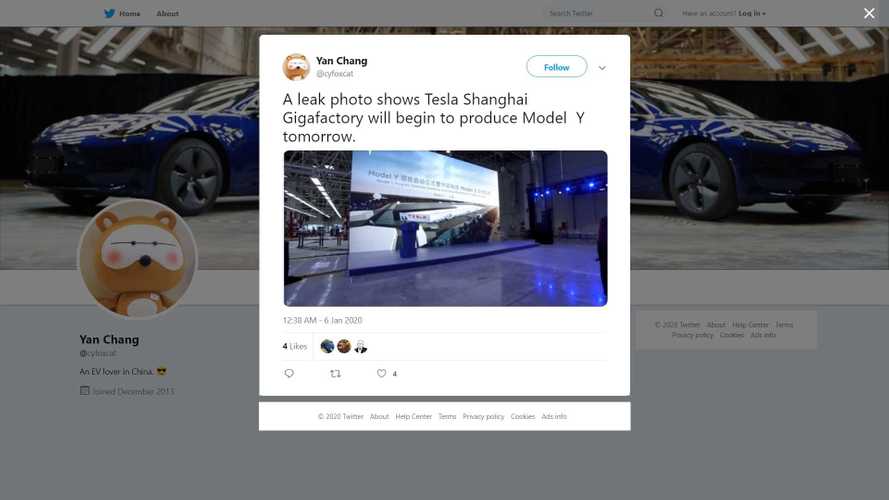 The Chinese journalist Yan Chang shared a leaked image of the board for the ceremony.

We have been anticipating for a while that Tesla may start the Model Y production much earlier than expected. We just did not imagine it would be on January 7. Yet, the Chinese journalist Yan Chang, one of the first to review the Model 3 made in Shanghai, shared on Twitter this leaked image. According to him, it shows the Model Y production is just hours away from starting.

Unfortunately, the image presents a very low resolution and does not allow us to try to get more information from it. Part of the date for the “Model Y Program Opening Ceremony” is 2020, while the other numbers can be 1 an 7, a reference to the month and day in which it will take place.

Tesla Model Y Is Now Available To Order In China
⠀

Will The Tesla Cybertruck Cannibalize Sales Of The Model Y?

Despite not being sure of what the numbers indeed are, Chang reports typically in an accurate way, and we prefer to trust him on this one. If the information is not right for any reason, we will update this to reflect the precise date of the opening ceremony. Anyway, we doubt that: Bloomberg informs that Elon Musk is on his way to China for the delivery of Model 3 units. Perhaps he has something more to deal with there.

Despite not being sure of what the numbers truly are, Chang normally reports in an accurate way and we prefer to trust him on this one. If the information is not right for any reason, we will update this to reflect the precise date of the opening ceremony.

This is probably why Tesla started taking orders in China for the Model Y at the beginning of the month. Legacy automakers start to produce vehicles two to three months prior to delivery. The first China-made Model 3 first appeared in November and the deliveries ceremony – with a wedding proposal – started at the end of December.

If Tesla takes the same time to start delivering the Model Y, we could see them in Chinese streets by the end of February. Right in Q1 2020, as the Deutsche Bank reported. What about the US? We'll have to wait for Fremont to start doing it. Or to have some first units imported from China.