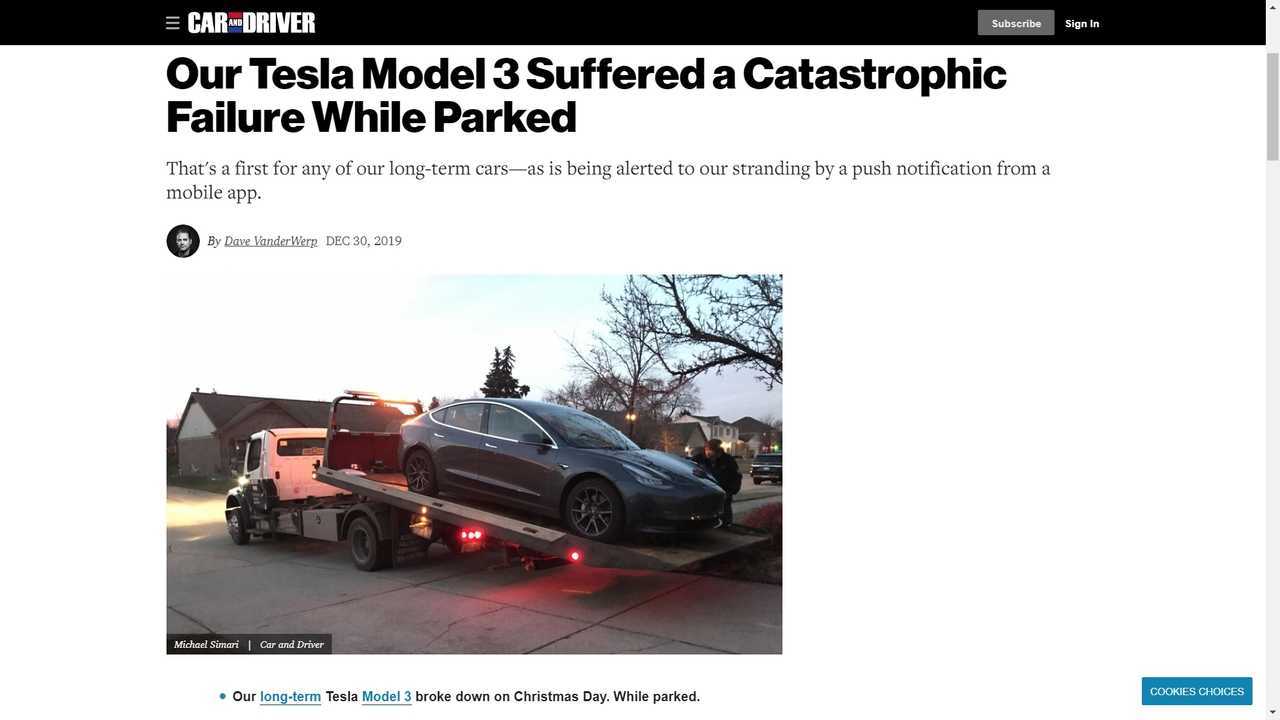 The magazine was warned about the issue through the Tesla app on Christmas.

We love to report nice things about Tesla, such as the wedding proposal that happened at the delivery of the first 15 units of the China-made Model 3. Yet, some think we search for bad things or deliberately try to turn good stuff into bad.

***UPDATE: From Car And Driver:

UPDATE 12/31/19, 10:00 a.m.: Although it’s possible the timing is purely coincidental, the service department at Tesla’s Toledo, Ohio, facility contacted C/D within three hours of this story's initial publication, offering a loaner car, a rental, or $100 per day in Uber credit while our Model 3 is in the shop. They also said parts are on the way and the car will be ready for us on Thursday (January 2). We will provide full details of the outcome of the car's repair and its return to our long-term fleet as they become available.

Would a frunk filled with flowers be a production defect? Only if the flowers grew there. If that were the case, we would report it as a problem and not as something romantic because this is our job. As it was when the paint chipped easily or peeled when washing, or when the MCUv1 started to fail due to excessive logging.

So is Car And Driver's, which had an issue with their long-term Model 3: it would not drive anymore. Any car can stop running, some will say. But not when parked. And they will also not warn about that through a push notification on the manufacturer’s smartphone app.

The warning is definitely a good thing, as was the quick rescue Car And Driver had on Christmas. According to the magazine, it only took Tesla half an hour to send a tow truck. What the publication did not like was the fact that it did not know what was going on. And that Tesla did not offer a transportation alternative while the Model 3 is waiting for repair.

Two days later, on December 27, the Toledo Tesla Service Center informed Car And Driver the car had issues in its rear-drive unit, the pyrotechnic battery disconnect, and the 12V battery. The shop would need the parts to arrive to start fixing the car, which indicates this is probably not a common issue.

That is another point of criticism from Car And Driver: the magazine finds it unacceptable for such an expensive car to get stranded like this and that its servicing takes so long to put it back to work.

What may have gone wrong? Could rats have eaten the harness, as it once happened to Delores? Did the pyrotechnic battery disconnect fire up due to a malfunction? What does the 12V battery have to do with it all? Are you aware of any similar cases? Why was there no loaner for this situation? Car And Driver promised to keep us posted.