And this driver could have seen it coming.

Crossing a gore lane is a moving violation. But there are lots of drivers that think it is there just to make the road look better. Or because the guys that paint these lines had a bit of free time to go artistic. The ones that know its purpose often get mad police are never there to catch the guys that disregard the gore lane function. Well, not this time. And TeslaCam was there to register the whole scene. 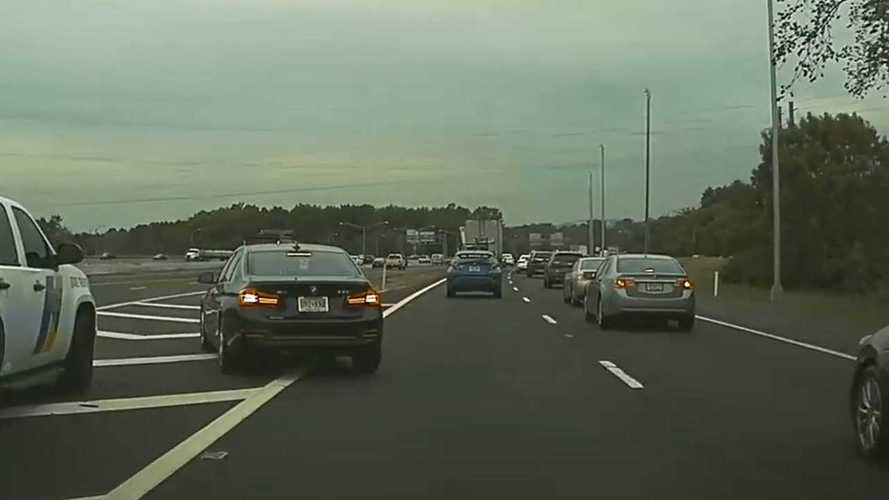 We have no idea where action has developed. The drawing on the police car doors resembles the shape of Texas, so it could have happened in one of the state’s highways. Most of the license plates also seem to be the ones used there. If you happen to know exactly where it was, let us know in the comments.

TeslaCam Shows It Is Not Speed That Kills: It's Stupidity

As you can see, the Tesla driver that has recorded everything had already passed the limits of the gore lane when the BMW 3 Series crosses its white lines and joins the long line of cars right in front of the EV.

But the BMW driver’s joy for having cut all traffic ends a few seconds later when a police officer parked at the gore lane orders him to pull over.

We have no idea how many minutes he had to wait for the police officer to give him a lecture, a fine, and tell him to leave. But it must have been a long time, mostly for educational purposes.

Isn’t it great when you know law enforcement is working correctly? When you do not feel stupid for complying with rules that most people seem to disregard or simply to disrespect for fun?

What a wonderful world would this be if common sense was really common, right? If rules were respected because they intend to prevent accidents, to keep people safe and able to get back home in one piece. But that is utopian. While we don’t get there – if ever – it is good to know the long arm of the law is working. And pulling over bad drivers.