It never gets old watching the Model S provide a proper beatdown.

Watch as this Tesla Model S P100D crushes contender after contender at the quarter-mile drag strip.

This footage comes to us from the Barona drag strip out in San Diego, California.

The Model S featured is a 2018 P100D. The P100D is the king of the strip, though the newer Raven version is quite a bit faster yet. 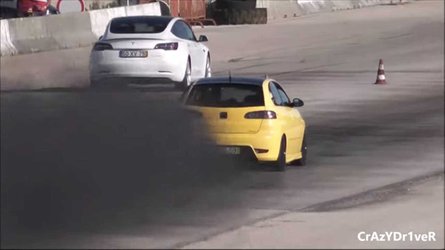 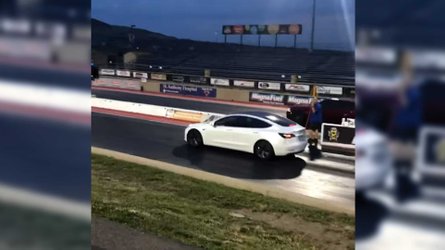 This video features 3 races. In the first matchup, the Model S goes up against a classic car. In the second race, it appears to be a newer Pontiac Firebird lined up against the Tesla. The final race is Mustang versus tesla.

Can any production car out there beat the Model S? The answer to that is yes, but the only ones to do so are crazy expensive supercars/hypercars. There's simply no family sedan that can come close to matching the acceleration of the Model S.

Watch the domination by Tesla in the video above.

The Tesla Model S P100D features dual electric motors and a 100kWh battery. The range is superb although it is the rocketship acceleration potential that will draw most shoppers to this sedan.

Interior quality is improved over the base models although the ride can still be overly firm.

A 17-inch touchscreen replaces physical controls (whether you like it or not) and features like a Bioweapon defense mode to block out harmful odors, remote software updates and near-autonomous driving capabilities underline this super sedan’s pioneering aspirations.