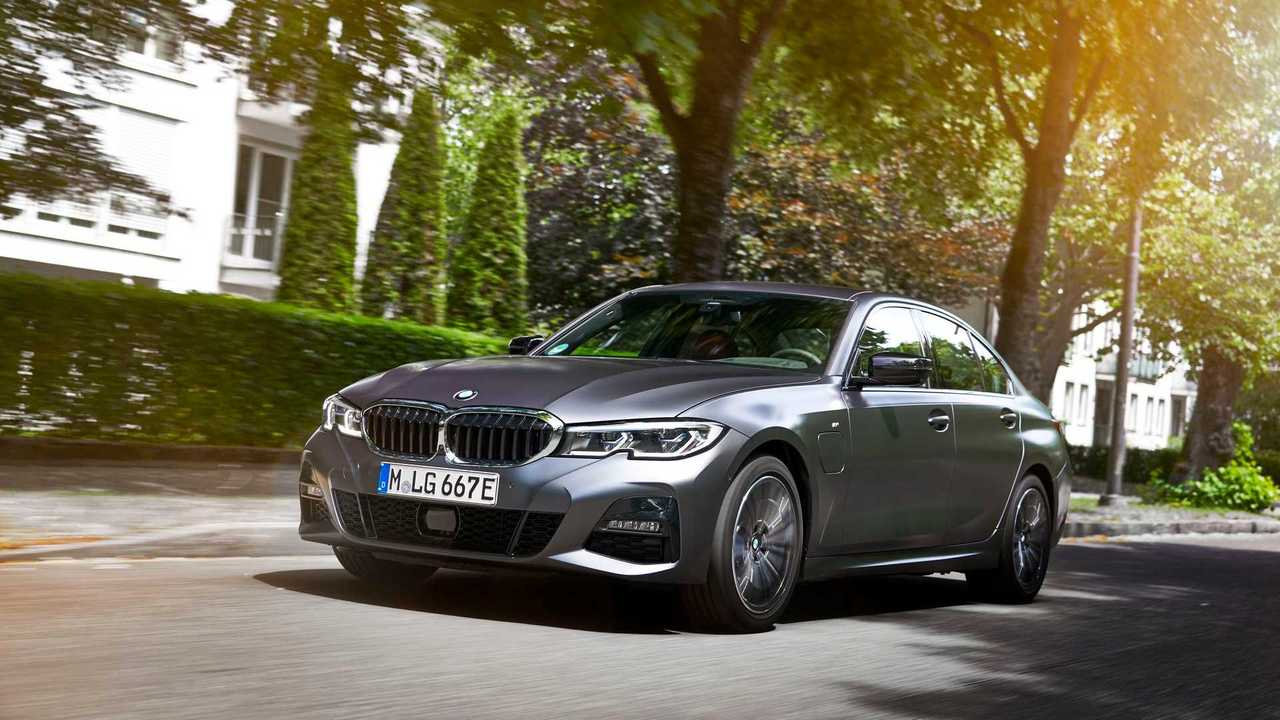 The latest generation of the sporty premium sedan from BMW gets more range of 51-59 km (32-37 miles) under WLTP test cycle.

Hopefully, sales of BMW's plug-in will soon return back to growth. Next year, the 330e Sedan will be joined by the BMW 330e Touring version.

Sportier and more efficient than ever thanks to the latest BMW eDrive technology: The new BMW 330e Sedan celebrates its market launch.

14.08.2019 Press Release
Plug-in hybrid variant added to the drive system line-up for the new generation of the sports sedan – Electric range over 50 per cent higher than predecessor’s, now a maximum 66 kilometres (41 miles)* – CO2 emissions down by more than 15 per cent – Increased sprinting power: Output peaks at 215 kW/292 hp with standard-fitted XtraBoost.

Munich. A combination of peerless dynamics and exemplary efficiency defines the character of the new BMW 3 Series Sedan. And now the addition to the range of drive solutions of a plug-in hybrid system brings an extra, particularly future-focused angle to the new sports sedan’s core attributes. The latest generation of BMW eDrive technology teams up with a four-cylinder petrol engine to significantly enhance the sporting prowess of the new BMW 330e Sedan (whose worldwide market launch is now underway) and deliver an even richer electric driving experience. Making its debut appearance in a BMW, the standard-fitted XtraBoost raises the system output of the plug-in hybrid to a maximum 215 kW/292 hp. The lightning-fast responses of the drive system headline the new BMW 330e Sedan’s driving characteristics. Added to which, its electric range is over 50 per cent greater than that of its predecessor; 66 kilometres (41 miles)* is possible with zero local emissions. Fuel consumption and emissions are down by more than 15 per cent on the levels of the predecessor model – to 1.9 – 1.6 litres per 100 kilometres (148.7 – 176.6 mpg imp)* and 43 – 37 grams of per kilometre*.

In the new BMW 330e Sedan, the intelligently controlled interplay of electric motor and combustion engine reaches a whole new level. The electrification of the powertrain contributes more than ever not only to increasing efficiency but also to a distinctive form of driving pleasure. The plug-in hybrid system pools the abilities of a 2.0-litre four-cylinder petrol engine with BMW TwinPower Turbo technology and output of 135 kW/184 hp with the talents of an electric motor, which generates peak output of 83 kW/113 hp. Together, the two drive sources produce maximum system torque of 420 Nm (310 lb-ft).

A brand-new feature – and included as standard in the new BMW 330e Sedan – is XtraBoost, which reveals the car at its most dynamic. The driver can quickly bring XtraBoost into play by activating SPORT mode with the Driving Experience Control switch. A vigorous stamp on the accelerator uncorks an additional 30 kW/40 hp on top of the combined 185 kW/252 hp already generated by the combination of electric motor and combustion engine – and XtraBoost keeps it on tap for up to 10 seconds. The result is the signature powertrain character of the BMW 3 Series Sedan, comprising (for the first time in a hybrid model from BMW) incredibly sporty yet also precise accelerator response, and a specific shift program for the eight-speed Steptronic transmission including engine-braking downshifts.

The instant-impact XtraBoost delivers a significantly more intense experience of acceleration than a conventionally powered vehicle with comparable output could offer. For example, if the driver suddenly puts their foot down hard from 20 km/h (12 mph), in as little as a second the new BMW 330e Sedan accelerates with around twice the vigour of a car powered solely by a combustion engine. Within three seconds, it opens up a car’s-length gap. XtraBoost can still be accessed with the high-voltage battery at minimum charge, as well as in kickdown and with the transmission selector lever in the M or S position.

The new BMW 330e Sedan sprints from 0 to 100 km/h (62 mph) in 5.9 seconds en route to a top speed of 230 km/h (143 mph). The driving experience is accompanied by a model-specific and emotionally engaging drive system note, which also finds its way into the interior. And so the new BMW 330e Sedan vividly showcases its sporty and dynamic side, blended with the proven qualities of a plug-in hybrid car.

In the HYBRID driving mode, the new BMW 330e Sedan can hit speeds of up to 110 km/h (68 mph) on electric power alone – an increase of 30 km/h (19 mph) over its predecessor. And ELECTRIC mode opens the door to locally emission-free driving at 140 km/h (87 mph), up from 120 km/h (75 mph). Hybrid-specific standard features of the new BMW 330e Sedan include acoustic pedestrian protection. When driving on electric power, an exterior speaker system generates an unmistakable sound created specifically for electrified BMWs. At low speeds, the drive system’s bespoke note exudes aural presence, without impinging on the acoustic comfort of those on board.

The new BMW 330e Sedan’s electric motor is integrated into the eight-speed Steptronic transmission, saving space. Intelligent design allows the hybrid-specific version of the transmission to be no more than 15 millimetres longer than corresponding variants for conventionally powered variants of the new BMW 3 Series Sedan. Power generation by means of braking energy recuperation, where the electric motor plays the role of a generator, works particularly effectively. The electric energy channelled into the high-voltage battery either in this way or when plugged into the power grid also feeds the 12-volt on-board power supply. All of which renders a combustion engine-driven generator surplus to requirements and further enhances overall system efficiency.

With a gross energy content of 12.0 kWh, the lithium-ion high-voltage battery in the new BMW 330e Sedan enables an increase in electric range of more than 50 per cent over its predecessor – to 59 – 66 kilometres (37 – 41 miles)*. Meanwhile, the second generation of the plug-in hybrid sports sedan cuts fuel consumption and emissions by over 15 per cent to 1.9 – 1.6 litres per 100 kilometres (148.7 – 176.6 mpg imp)* and 43 – 37 grams of CO2 per kilometre*. The combined-cycle electric power consumption of the new BMW 330e Sedan is 15.4 – 14.8 kWh per 100 kilometres*. With its low CO2 emissions and long electric range, the new BMW 330e Sedan fulfils all the requirements for reduced company car tax in Germany, where only half the gross list price is taken as a basis in determining the benefit of kind for private use.

The high-voltage battery in the new BMW 330e Sedan is mounted under the rear seats, while the petrol tank sits over the rear axle. This means the plug-in hybrid’s cargo-carrying ability is only slightly reduced, and load capacity of 375 litres can be expanded as required thanks to the 40 : 20 : 40 split/folding rear-seat backrests.

Customers opting for the plug-in hybrid model can choose from virtually the full list of options otherwise available for the new BMW 3 Series Sedan. The new BMW 330e Sedan is also offered in Advantage, Sport Line, Luxury Line or M Sport form as an alternative to basic specification. And it can be ordered with features including Adaptive M suspension with variable sport steering and M Sport brakes. From November 2019, the new BMW 330e Sedan will also be available with a trailer coupling with electrically pivoting hitch ball. The maximum trailer load for the plug-in hybrid model is 750 kilograms.

The full selection of innovative comfort- and safety-optimising driver assistance systems – from the Driving Assistant Professional with steering and lane control assistant to the Parking Assistant including reversing assistant – is also available. Standard specification for the new BMW 330e Sedan includes preconditioning of the interior with the heating or air conditioning. Energy stored in the high-voltage battery is used to power the auxiliary heating. In low outside temperatures, this means the interior can be warmed up with user-friendly ease before getting into the car, even when the battery charge is low. This interior preconditioning function also allows the interior to be cooled in higher ambient temperature.

With the launch of the new BMW 330e Sedan, new digital services will be presented which make charging the high-voltage battery during a journey even easier and more attractive. Selecting a public charging station prompts the navigation system to come up with recommendations on nearby hotels, restaurants, cafés and sights or cultural centres. And it is also possible to check the whereabouts of charging stations via the display and control system. The driver can likewise check the predicted availability of public charging points at the time of arrival. Added to which, it will be possible to reserve charging points for a limited time, should this facility be offered by the charging infrastructure operator in question.

The drive technology presented in the plug-in hybrid model variant of the new sports sedan will also be available in the new BMW 330e Touring from summer 2020. This will be the first time customers ordering a Touring model from BMW can choose a plug-in hybrid drive system. The new offering sees BMW forging ahead with its model offensive for vehicles with electrified drive systems.

BMW plug-in hybrid models offer an array of benefits in everyday use.

The new BMW 330e Sedan is ready to take advantage of low-emission zones designated by cities exclusively for zero-emission driving. With the new BMW eDrive Zones function (which will be part of standard equipment for BMW plug-in hybrid models from 2020 and can be retrofitted), geofencing technology will make it possible to detect low-emission zones automatically. When entering these zones, the vehicle switches into pure-electric driving mode automatically, from which point it behaves like a fully-electric vehicle and can therefore enjoy equal access rights (subject to local regulations). The new function ensures the potential of plug-in hybrid vehicles is utilised to even greater effect. The increase in the proportion of journeys driven on electric power not only plays a role in optimising efficiency, it also helps to reduce operating costs for customers. This applies to driving in urban areas, in particular, where an electric drive system delivers a higher level of efficiency across the board than a petrol or diesel engine.

The “real” environmental impact of plug-in hybrid vehicles has been questioned on occasion, especially in markets where the proportion of green energy used by the public energy grid remains small. The BMW Group conducted a full-cycle CO2 certification for the new BMW 330e Sedan – from raw material procurement, the supply chain, production and the use phase, all the way to recycling.