Meritor's first EV project in Europe is with Alstom. Potentially for hundred of electric buses.

A lot of automotive suppliers are scrambling to catch onto the electric revolution and get a part of the pie of the future market.

The French manufacturer already received the first orders for the all-electric Aptis buses (for Paris and Strasbourg), which are equipped with Meritor's steerable axles both in the front and rear.

"The front and rear Meritor axles are steerable to offer a narrow turning radius to increase the vehicle’s maneuverability and, according to Alstrom, create a smaller footprint on the road by 25 percent compared to conventional buses. With the axles placed at the outer ends of the vehicle, the Aptis bus enhances passenger comfort due to low floors and double doors, permitting smooth passenger flows and accessibility for wheelchairs and strollers.

The axles, using casted housings from Meritor’s joint venture foundry in Vénissieux, France, brakes from its Cwmbran, United Kingdom plant and gear boxes from its Steyr, Austria plant, will be assembled in Cameri, Italy. Final assembly of these electric buses will be done at Alstom’s production site in Hangenbieten, France, and deliveries are expected at the end of 2019." 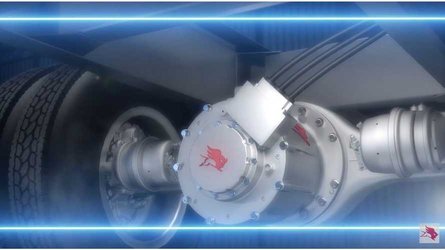 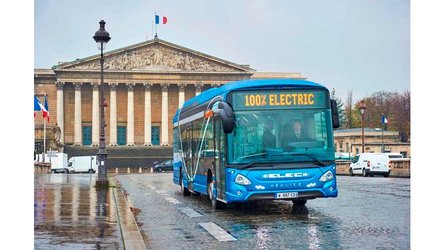 “We developed a product solution in less than a year to support Alstom’s continued drive to make European cities cleaner with cutting-edge electrification systems for a rapidly expanding market. It also positions Meritor’s Blue Horizon products for further growth in a segment that will transform the industry.”

The Alstom Aptis in action: