Opel Corsa-e/Vauxhall Corsa-e: Everything We Know 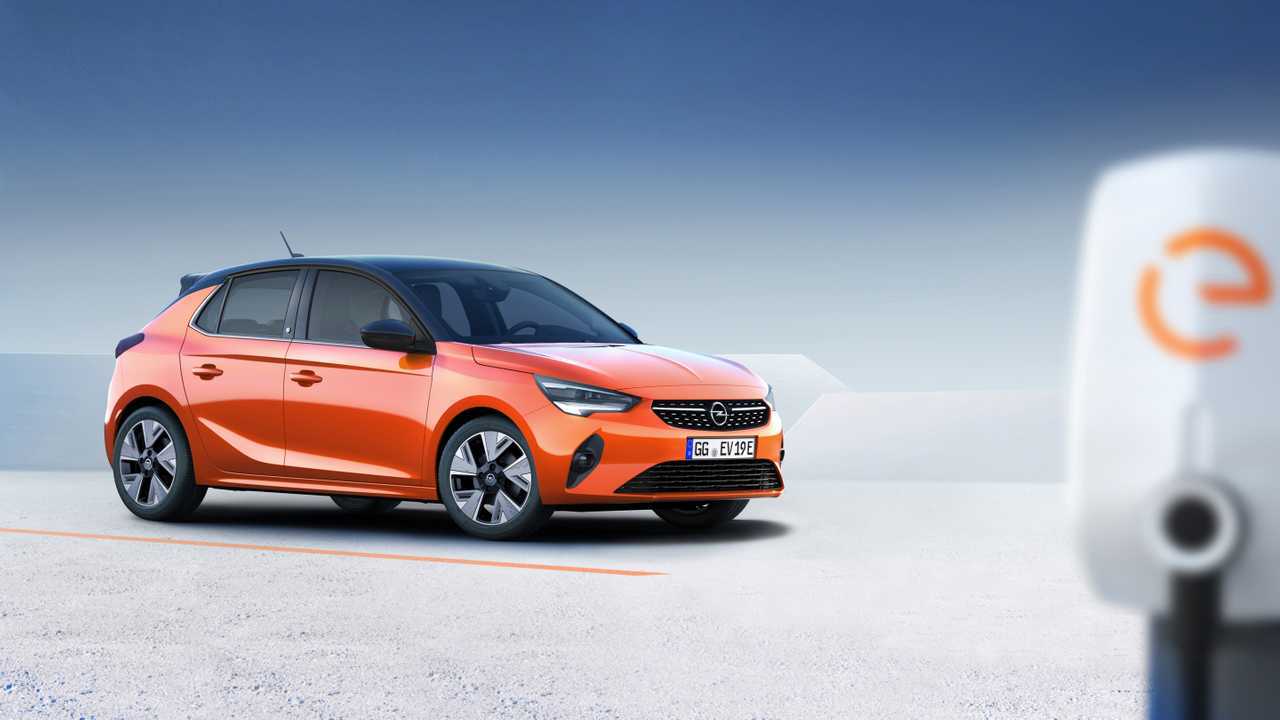 Those two subcompact twins are a direct derivative of the Peugeot e-208 and are based on the same e-CMP platform as the DS 3 Crossback E-Tense.

The preliminary specifications indicate the same 50 kWh and 100 kW electric motor, which translate to decent range and performance for the European subcompact.

There are although small differences compared to Peugeot e-208. The range of Corsa-e is expected 330 km WLTP/205 miles instead of 340 km WLTP. The on-board charger to be 11 kW three-phase as standard (at least Vauxhall confirmed it) compared to 7.4 kW single-phase or 11 kW three-phase in the e-208. We assume that the highly popular 3-phase charging points in Germany (in many other European countries) prompted also Opel to choose the 11 kW charger as standard.

From a design standpoint, the Corsa-e looks very good with simple, modern lines and an attractive interior. We are eager to see the real photos and videos to say more, but the first set of images alone should raise huge interest and by the way... put pressure on the Renault ZOE.

Rüsselsheim.  Opel goes electric. With the all-new, sixth generation Corsa, the German carmaker is offering for the first time a battery-electric version with a range of 330 kilometres (WLTP1, provisional figure). Opel has chosen the brand’s most popular model to finally bring electric mobility out of its niche-existence. The Opel Corsa is an absolute bestseller. More than 13.6 million units have been produced since the world premiere in 1982. The Corsa has made millions of people mobile; now it is offering them access to emission-free driving. The order books for the sixth-generation Corsa will open in a few weeks, beginning with the Corsa-e, followed by the diesel and petrol versions.

Opel has been producing cars for 120 years and has always made technology available to a wide audience of car buyers. The new Corsa-e offers state-of-the-art electric mobility. With a range of 330 km according to WLTP1, the five-seat Corsa-e is suitable for unconstrained every-day use. The 50 kWh battery can be fast-charged to 80 per cent of its capacity in 30 minutes. The Corsa-e is prepared for all charging options – via cable, wallbox or high-speed charging – and the battery is covered by an eight-year warranty. The state-of-charge can be checked with the “myOpel” app, so that charging times and costs can be optimized at all times.

Furthermore, the range can be adapted by the driver, who can choose from three driving modes – Normal, Eco and Sport. Sport increases responsiveness and driving dynamics, with a moderate loss of driving range. In Eco mode the Corsa-e becomes a long-distance runner, significantly increasing the range while hardly affecting comfort.

The Corsa-e’s propulsion system combines emission-free driving with a maximum “fun-to-drive” factor. Thanks to the 100kW (136hp) power output and a maximum 260 Nm of instantaneous torque, the highlights include responsiveness, agility and dynamic performance. The Corsa-e needs only 2.8 seconds2 to sprint from zero to 50 km/h, only 8.1 seconds2 from zero to 100 km/h – a match for sports cars.

The Corsa-e also looks dynamic thanks to its sporty design, while the compact exterior dimensions of previous generations are retained. With a length of 4.06 metres the Corsa remains an agile, practical and well-arranged five-seater. The roof line is coupé-like, 48mm lower than its predecessor’s, without detriment to headroom. The driver sits 28mm lower. Handling and driving dynamics benefit from the lower centre of gravity. The handling is responsive and dynamic, for more fun behind the steering wheel. The modern interior with fully digitalised cockpit can even be upgraded with leather seats.

Technologies and assistance systems that are more often found in higher market segments make their debut in the Corsa-e. The top features include the adaptive, glare-free IntelliLux LED® matrix light that Opel offers for the first time in the small car segment. The eight LED elements, controlled by a newest-generation high-resolution front camera, continuously adapt the light beam to the prevailing traffic situation and the surroundings. Advanced driver assistance systems provide tangible additional safety. Thanks to the new front camera traffic sign recognition now detects additional information, such as LED signs. The speed limits saved in the system are also shown in the display.

Radar supported adaptive speed control and sensor-based flank-guard celebrate their premiere in the new Corsa. Side blind-spot assist and a variety of parking assistants are also available.

1 Preliminary data determined according to WLTP test procedure methodology. EG type approval and Certificate of Conformity are not yet available. Preliminary values may differ from official final type approval data.

Luton – Vauxhall has released first images of the all-new Corsa-e, one of the most hotly-anticipated new cars to go on sale in 2019.

As part of the PACE! strategic plan, Vauxhall’s Corsa-e and Grandland X PHEV will lead the British brand’s electric charge this year. Two more all-electric models will follow in 2020, including the successor to the Mokka X SUV and Vivaro van. All models are vital to Vauxhall’s ongoing reduction of CO2.

By 2024, Vauxhall will have an electrified version of every model in its range. A key role is played by the shared multi-energy platforms. They make it possible to offer various propulsion systems on a common platform.

A sales sensation since 1993

Corsa has been Vauxhall’s best-selling car for many years, with over 2.1 million Corsas sold in the UK since it launched in 1993. The British buying public are familiar with its name and looks, and have a fondness for its compact dimensions and interior packaging. Corsa is just as popular in Europe with over 13.5 million sold.

The Corsa-e has 205 mile range1 that can be extended by up to 40 per cent in Eco mode. The battery can be charged to 80 per cent capacity in 30 minutes at a rapid-charge station.

Corsa-e drivers can choose from three drive modes: Normal, Eco and Sport. In Normal mode, the 50kWh battery allows a driving range of 205 miles1 according to WLTP. Sport alters responsiveness and delivers more performance, which result in a moderate loss in driving range of around 10 per cent. In “Eco”, the Corsa-e becomes a long-distance runner. All the car’s systems and the electric drive are adjusted for maximum energy efficiency, without significant detrimental effect on comfort. Compared with “Sport”, range is increased by up to 40 per cent.

In order to further improve efficiency, the Corsa-e features a regenerative braking system to recover the energy produced under braking or deceleration. This excess kinetic energy is converted into electrical energy and either used immediately or stored in the battery. The driver can choose between two levels. At the lower level, the Corsa-e’s deceleration is similar to the engine-braking of a conventional car. At the highest level of energy recuperation, the drag torque of the electric motor is much higher.

The Corsa-e is as easy to charge as it is to drive. It charges via a cable that can connect to a wallbox or fast charger (and the battery is guaranteed for eight years). The Corsa-e is equipped as standard with an 11kW on-board charger.

The Corsa-e is a pioneer in every way thanks to its advanced technologies, driver assistance systems and connectivity, which are more familiar to premium car drivers.

Numerous camera and radar-based assistance systems enable safer, more relaxed driving. The new Corsa’s infotainment systems up to and including the Multimedia Navi Pro are available with a 10-inch colour touchscreen. They are compatible with Android Auto and Apple CarPlay.

Side Blind Spot Alert uses ultrasonic sensors in the front and rear bumpers to alert the driver to the presence of moving objects in the blind spots either side and to the rear of the car. A warning symbol lights up in the corresponding exterior mirror.

Drowsiness Detection warns the driver, via audio and visual signals at three levels, to take a break after two hours of driving at speeds higher than 40mph. The system can alert the driver to the need for a break at any time if it detects that the car is behaving dangerously, e.g. swerving.

The Corsa-e helps the driver into and out of parking spaces by various means:

The Multimedia systems are compatible with Android Auto and Apple CarPlay and feature control via integrated voice recognition.

They also offer the new Vauxhall Connect telematics service. With helpful functions, such as Live Navigation with real-time traffic information, key vehicle data checking via an app, direct connection with roadside assistance and emergency call, the driver and passengers enjoy additional peace of mind. Help can be reached within seconds via the red button. If the seatbelt tensioners or the airbags are deployed, the emergency call is activated automatically.

The “Open & Start” keyless locking and start system (with anti-theft protection) recognises the driver via smart device. The engine is switched on a via the start button in the instrument panel.

1Preliminary data determined according to WLTP test procedure methodology. EG type approval and Certificate of Conformity are not yet available. Preliminary values may differ from official final type approval data.