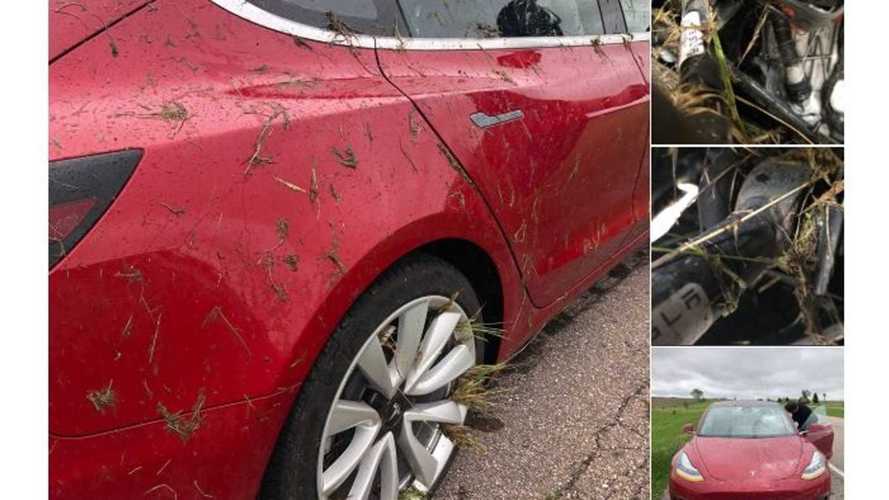 This Model 3 was not on Autopilot at the time of the incident.

Tesla Model 3 owner Vivianna Van Deerlin (Tesla Boot Camp) took to Twitter to share videos and the story surrounding a recent incident involving a near-miss semi-truck accident. She was driving her Model 3 Long Range RWD about 80 mph on the highway when she noticed a semi swerving back and forth. Vivianna decided to disengage Autopilot and try to safely handle the situation.

Tesla Model 3 Accident: TeslaCam Shows Why You Need A Dashcam

The Tesla owner attempted to pass the swerving truck, but it veered toward her Model 3. She had to make an evasive maneuver, which ended up forcing her to temporarily lose control of the car and drive into a ditch. Thankfully, the Model 3's low center of gravity kept it stabilized and free from spinning out, rolling over, or heading into oncoming traffic. Even though the grassy, muddy ditch posed the potential for getting stuck, the Model 3 was able to power its way out unscathed.

After the incident, the Model 3 was drivable and the passengers were unharmed. Vivianna took the car to a Tesla Service Center to make sure that everything checked out okay. The only issue was a plethora of mud and grass that made their way into the car's crevices, brakes, and suspension.

As Vivianna points out, people will likely say she should have made different decisions. But, if you weren't there in the situation, driving the car, there's really no way to know how you would have reacted and what would have ensued. She says perhaps she should have let Autopilot handle the situation, but there's no way to know how that may have played out. The most important thing here is that she and her husband are safe and the car wasn't damaged.