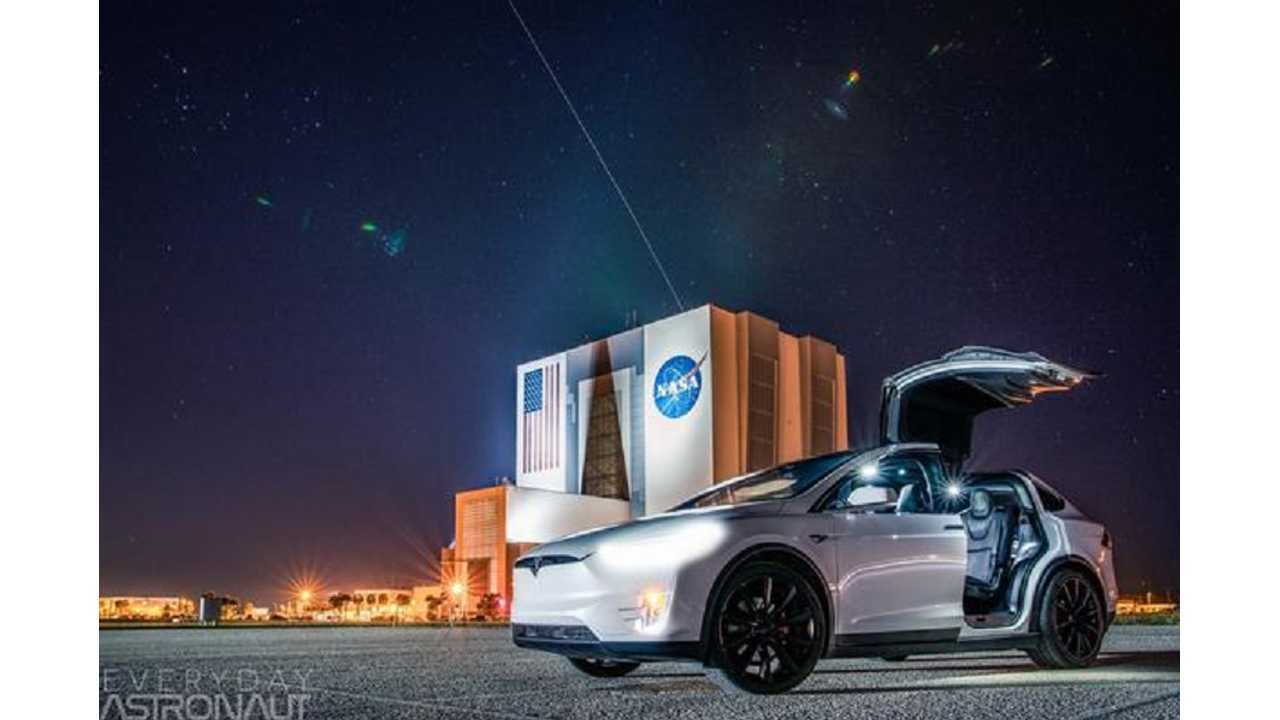 A MAN WITH TESLA SUPERPOWERS, A SPACEX LAUNCH, AND A MEETING OF THE MINDS

When Steve Sasman invited me to the SpaceX Falcon Heavy launch, I jumped at the chance. Steve and I met back in 2015 during his first 48-state Tesla road trip. At the time, Elon Musk tweeted Steve's blog post about his travels. Since then, Steve also completed another 48-state road trip while visiting 107 Tesla stores and meeting over 500 Tesla employees. Steve also got massive press (CNN, NBC, ABC, Bloomberg, etc.) when he opened the first-ever Tesla Hotel. Steve nearly played pro volleyball, he’s a triathlete, and he hikes up and down mountains in minutes (literally). This guy has superpowers.

Could Tesla And SpaceX Join Hands For Global Internet Service?

I quickly accepted Steve’s invitation and we met not far from Cape Canaveral in a small town called Lake Nona. Sure, Steve could’ve flown to Orlando from his home in Phoenix. Instead, of course, he chose to make yet another Tesla road trip. BTW, if you’re interested in Tesla road trips, Steve has some super-helpful advice. Sure, Tesla Mom is the Queen of Tesla road trips, but, Steve is definitely the King. Of the three Teslas that Steve proudly owns, he picked his trusty 2012 Model S in order to break (gulp) the 200,000 mile mark on his road trip to see the Falcon Heavy.

After arriving at the Courtyard Marriott in Lake Nona — chosen partially for its plentiful Tesla and EV chargers on-site — we were psyched for our first-ever SpaceX launch. I spoke with South Floridans Mojo (from Signature Custom Wraps) and Teslatino who were also en route to Cape Canaveral. We even heard Everyday Astronaut was roaming around, but, we couldn't track him down. Days passed as there were several launch delays. But it didn’t matter. I was humbled to have been part of such a wonderful group of Tesla Referral Winners (not me, I was Steve’s +1) and learn more about their dedication, support, and love of Tesla.

It turns out that Steve wasn’t the only person I met with superpowers. After reading about his adventures in an enthralling comic book, I actually met the real-life Starman (see below) — back here on earth, I presume, for this special occasion. I also ran into plenty of Tesla Owners Club Presidents from all over the planet (Taiwan, England, etc.). I happened to be long distance pals with one particularly cool Tesla club owner, Eli, from My Tesla Adventure. I’ve been a huge fan of Eli for years — following him religiously on YouTube and Instagram — and it was amazing to finally meet him in-person.

Eli introduced me to Anuarbek Imanbaev, who I’d been a big fan of via his Tesla Geeks YouTube channel. You’ve probably also seen Anuarbek in Tesla’s sensational Roadster video. Between Eli and Anuarbek, Steve and I learned so much about Tesla. Look out for some more big things (coming soon) from these guys. On Tuesday, we all had dinner at a stellar sushi spot in Orlando, Morimoto Asia, while talking Tesla and drinking whiskey until we were the last ones in the restaurant.

Above: Talking Tesla with the fellas at Morimoto Asia in Orlando pre-launch (Instagram: Tesla Geeks)

Even though the launch didn’t happen on Wednesday night, everyone arrived at the breathtaking Exploration Tower to view the launch. Tesla did it right. They invited an expert SpaceX team leader to explain the launch. And it turns out that he and his wife both have Teslas. Meanwhile, I was humbled to meet so many well-known YouTube stars in-person including Kim from Like Tesla and Ben Sullin from Teslanomics — two of my favorite channels for Tesla news. There were also YouTube personalities who cover the tech space and own, of course, Teslas. I was happy to meet Matt Ferrell, Andy Slye, and the indomitable What’s Inside crew.

Wind shear became an issue and SpaceX pushed the launch back, yet again. I had a bit of a family emergency and had to leave first thing the next day. And, grrrrr.... I missed the launch that night. However, Steve and I kept radio contact and the Falcon Heavy launch went off without a hitch. According to Steve, it was a life-altering experience. He even tweeted that one of the guys we were hanging out with, Chad Hurrin (who runs Frunk Yea Tesla Rentals), impressed his father so much at the launch, that his Dad immediately ordered a Model X for himself after the whole experience. Teslarati even ran a feature on it.

Above: A recap of the SpaceX Falcon Heavy launch (Youtube: CNN)

In any event, I wanted to thank Steve for the gracious invite. It was great to see SpaceX and Tesla fans mixing it up together. And although I missed the main event, it was fun to meet so many Tesla owners who’ve recommended the car to so many others. Tesla's Referral Program is a remarkable example of how Tesla’s owners can really become the company’s best ambassadors. Meeting so many of these folks over the course of the week was an honor. It gives me continued faith that the EV revolution, led by Tesla, is not coming soon — it's already upon us.