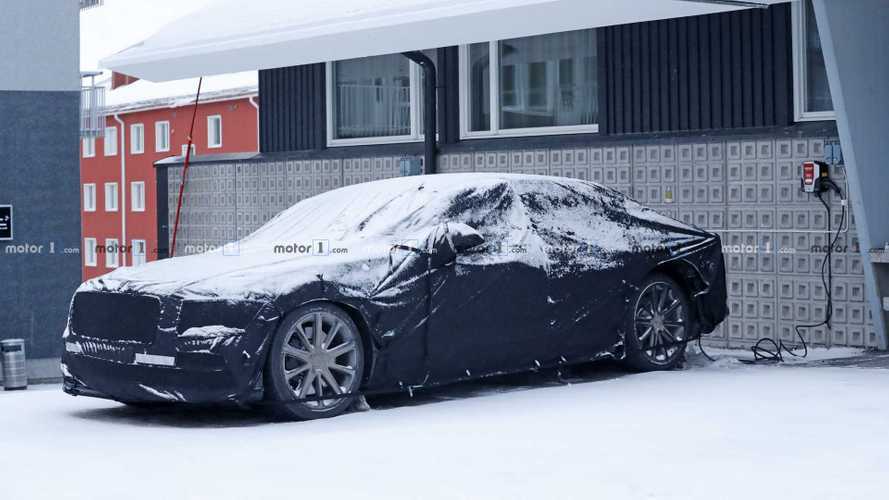 The luxobarge looks majestic even when hiding under a car cover.

We’ve been spying on the new Bentley Flying Spur since October 2016, back when test mules were carrying Porsche Panamera bodies. Fast forward to present day, we still haven’t seen Crewe’s fullsize luxury sedan in full, but prototypes are being caught with less and less camouflage with each new batch of spy shots.

This particular Flying Spur is a bit more interesting than the others since it’s the electrified version. That’s right – the new generation will feature a plug-in hybrid powertrain joining the familiar V8 and W12 versions of the luxobarge. The prototype was caught charging its battery pack, which will be a part of a PHEV system likely inherited from the Porsche Panamera 4 E-Hybrid. It won’t be the exact same setup as the Bentley Bentayga Hybrid since the opulent SUV uses a slightly bigger 3.0-liter unit whereas the electrified Flying Spur will pack a 2.9-liter unit.

Assuming the Porsche’s output numbers will carry over, the first-ever Flying Spur Hybrid will offer a combined output of 456 horsepower and 700 Newton-meters (516 pound-feet) of torque. With Bentley being positioned significantly above Porsche in terms of pricing, don’t be too surprised if the premium it will command over the electrified Panamera will come together with a bump in output.

In regards to styling, “evolution” is the name of the game. Although at a first glance this prototype might seem virtually undisguised, the headlights and taillights are still covered while the body has a lot of sneaky black camo to hide the real lines. With the Flying Spur being more or less a sedan version of the Continental GT, expect the coupe’s sleekness to be adapted to the four-door body style.

When will we finally see the all-new Flying Spur? Our money is on September at the Frankfurt Motor Show, although Bentley might want to wait a bit more before introducing this plug-in hybrid derivative.