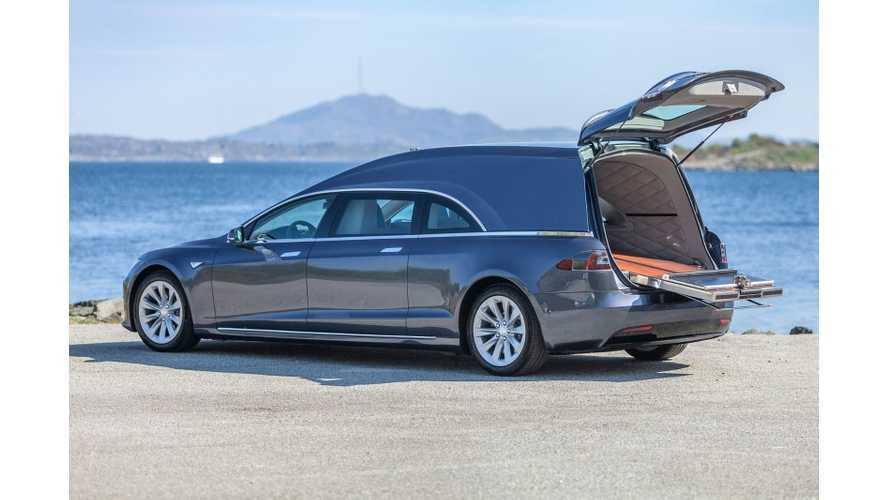 It's in Norway, so it's perfect if you're pining for the fjords.

Whether you're ready to make your first journey in an electric vehicle or your last, this Tesla Model S is exceptional. Heavenly, even. Heavily modified -- it's been bequeathed a rather long landau roof -- but now seats only two. The rear compartment is quite spacious but typically welcomes only one. This particular example shows only 1,000 km (621 miles) on the odometer. We assume most were collected before the significant remodeling.

The interior of this wagon is also fully customized from the front seats back. The rear accommodations feature a lovely wood floor that can actually be extended backward with the rear hatch opened, making egress easy.  The walls of the cabin are graced with diamond-quilted leather which, along with an all-electric drivetrain, make the vehicle deathly-quiet.

Located in Kopervik, Norway, the car is being offered up by the folks at Karmøy Bilsenter. The company customizes vehicles for a number of different purposes, though it does seem dealing with the dead is central to its mission. It bills itself as a" leading supplier of cars to the funeral industry" but also offers a number of other products and services.

Perhaps surprisingly, this is not the first Tesla hearse we seen. That honor goes to RemetzCar, which debuted its version back in 2016. More recently, that company has offered up a Model S station wagon.

If you happen to have taken a fancy to this unique build, be prepared for a pretty steep bill. According to the website Finn.no on which it is hosted, the asking price is 1,999,000 Norwegian Krone ($230,946). Shipping and taxes -- which are, of course, certain -- are extra. For a better look at this hearse inside and out, check our gallery below.