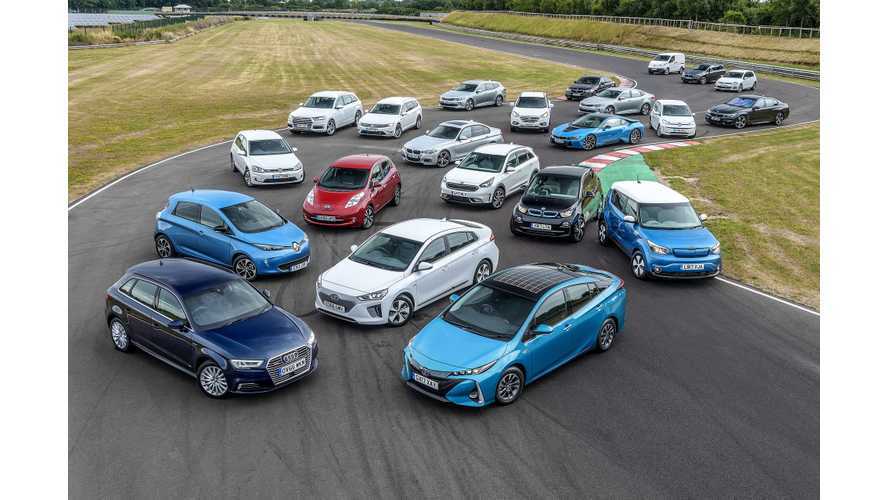 The Go Ultra Low collaborative campaign provides us more insight on plug-in electric car sales in UK, which in 2018 continued growth for the seventh year.

Stats say that sales increased 19% to 59,911 and new plug-in electric car was registered on average every nine minutes. The total number of registered plug-ins nears 200,000 (as of the end of the year there was 196,343).

Government-Funded Chargers In UK To Get Smarter Next Year

Survey Says: 18% Of Car Buyers In UK Might Go Electric Next Year

Interesting is the distribution of plug-ins between regions:

"From a regional perspective, the South East saw the highest demand across the nation, with 21,383 pure electric and plug-in hybrid vehicles registered– a 24% increase on 2017. Other leading regions include the West Midlands (8,601), South West (8,354), East Anglia (5,672), and Yorkshire and the Humber (5,344), making up the top five British regions for electric car uptake this year."

Year 2019 is expected to be better than 2018, because of new models like the Kia e-Niro, Audi e-tron and recently announced Nissan LEAF e+.

“In the context of the wider new car market, it is fantastic to see plug-in car registrations continue to go from strength-to-strength. Looking at the year ahead, 2019 is set to be a pivotal one for the electric car market. With even more new models being released, coupled with the introduction of initiatives such as London’s Ultra Low Emission Zone, we’re confident that the next 12 months will be a landmark year for the nation’s switch to electric.”

“Record levels of electric vehicle registrations clearly show how fast the UK is moving towards greener transport. The government has invested almost £1.5bn into our comprehensive Road to Zero Strategy, continuing to pave the way to a zero emission future.”