Following a teaser image from less than a month ago, Infiniti has released the first fully revealing picture of its new concept vehicle. Meet the all-electric QX Inspiration concept which will make its grand premiere at the upcoming 2019 North American International Auto Show. 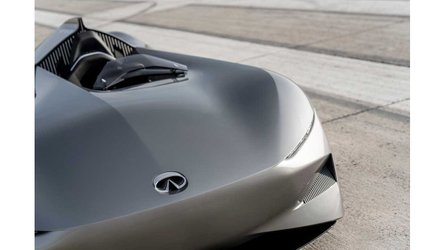 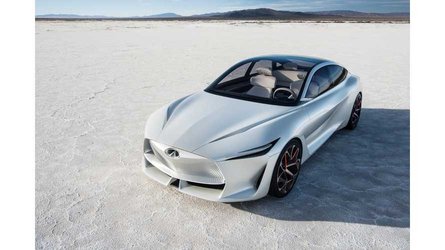 Nissan & Infiniti Both Expected To Reveal Next-Gen EVs In Detroit

The Japanese premium manufacturer explains the crossover study previews the electric future of the brand and represents its plans for performance-oriented electrified vehicles. In addition, the QX Inspiration introduces an updated design language, also seen in the Q Inspiration concept, which will influence the future production EVs of the marque.

“QX Inspiration is the beginning of a new era for Infiniti and an illustration of where we want to go with the brand. New technology has given us the opportunity to evolve our design philosophy – and the new vehicle communicates the serene strength at our core,” explains Karim Habib, Executive Design Director at Infiniti.

Underlining its electric nature, the vehicle has illuminated Infiniti badge and lettering at the front, while the traditional side mirrors are replaced by miniature cameras. Sleek headlights and a prominent fascia give the concept an imposing look when viewed from the front.

Infiniti says the new generation of architectures for electric vehicles enables the formation of “lounge-like interiors.” To that, the QX Inspiration adds hand-crafted touches using “traditional techniques” and a selection of materials “inspired by a subtle Japanese sensuality.”

The new concept is underpinned by a brand new platform specifically engineered for electric vehicles in support of the brand’s planned electrification push scheduled to begin in 2021. We don’t know what is powering the “future fully electric crossover” but, obviously, it has a pure electric powertrain of some sort underneath the skin.

The QX Inspiration will be revealed in full at the 2019 NAIAS on January 14th, so stay tuned for more information and the debut livestream.

By: Anthony Karr
++
Got a tip for us? Email: tips@insideevs.com