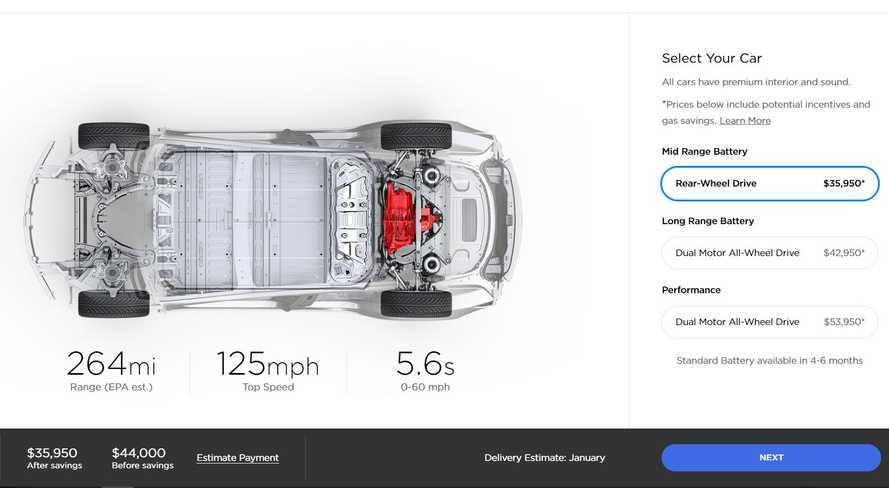 The Mid Range version of the Tesla Model 3 surprises yet again. The most affordable version of the mid-sized sedan, nicknamed "lemur," from the California automaker took everyone off guard when it first launched last October. Now, just days after getting a $2,000 price cut along with the rest of the company's offerings, it gets a 4-mile boost to its official range.

It still boasts the same battery, of course — the 62-kWh pack it's been equipped with from its birth. The range change only appears on the company's website at the moment (see the screenshot of the Model 3 Mid Range Design Studio above) as the EPA website still shows the 260-mile range it was first officially blessed with.

As you can see in the image below, when the model got its official EPA figures it was annotated with the remark "Combined range voluntarily lowered to 260 miles." The same voluntary lowering was done to the Long Range variant, though its 310-mile figure remains untouched on the Tesla website.

Though we wish we could announce the increase is due to some newly implemented efficiency, as far as we can tell the new figure is the result of a decision to go voluntarily "un-lower" the combined range number. We will, of course, let you know whether Tesla supplies an official reason for the raise.

The range of electric vehicles has always been quite subjective. It can vary slightly from car to car and see quite large differences with different temperatures, speeds, and terrain. If you're a Model 3 Mid Range owner, let us know in Comments what sort of numbers who've been seeing with yours.