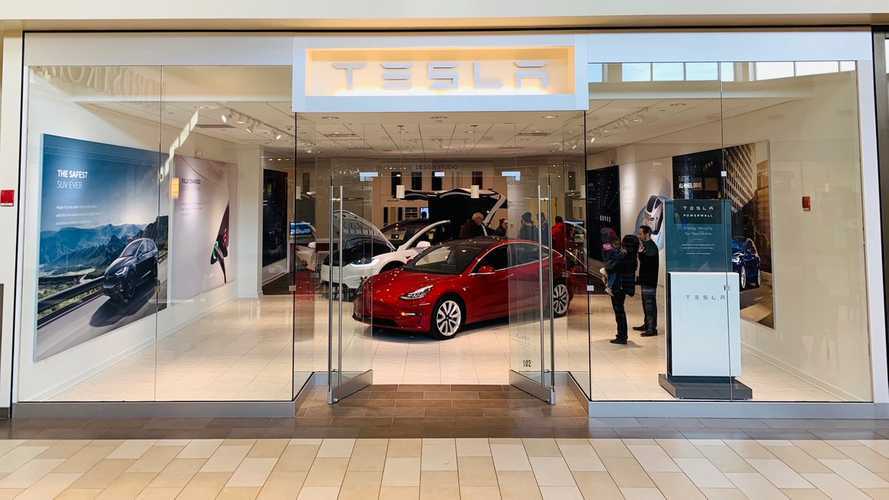 Buying a car can be a grueling process. Keith Barry writes in Consumer Reports, "In an era of online shopping and instant gratification, the traditional way of buying a car can seem like a painful throwback. Some dealers are still doing business the old-school way: insisting buyers haggle over the price, hiding fees and charges until the last minute, and making customers wait hours to sign form after form."

Above: A look inside one of Tesla's company-owned stores (Image: Tesla)

Barry cites, "a Deloitte study found that 60 percent of car buyers want to cut out the dealership entirely and purchase a vehicle online, directly from a manufacturer. That’s the model used by the electric carmaker Tesla, which relies on online ordering and company-owned showrooms."

However, "Traditional manufacturers are bound by franchise agreements with existing dealers, and some states don’t allow direct sales and require the dealership model." And Tesla continues to face significant opposition (depending on the state) for its approach to direct sales.

Consumer Reports' Barry also sat down with Guillaume Saint, global automotive lead at consulting firm Kantar to get his thoughts. While Saint acknowledges that owning and controlling a dealer network can get expensive, he admits that Tesla’s system is "a source of inspiration" for traditional manufacturers.

Above: Inside the thorny franchise dealership laws that are challenging Tesla and other carmakers when they try to sell direct (Youtube: Sean Chandler)

Barry notes "the Deloitte study found that 57 percent of car buyers disliked how much paperwork they had to fill out, 42 percent said the whole process took too long, and 40 percent hated haggling over price." In turn, Tesla has worked to simplify the car-buying experience and doesn't negotiate price.

And when it comes to car buying, it's clear Millenials want change. Kathy Gilbert at consulting firm CDK Global, says her company's in-house research shows "younger buyers are less tolerant of being handed off from salesperson to salesperson, long negotiations, and fuzzy pricing."

"Consumers today don’t want to deal with salespeople,” contends Patrick McMullen, MAXDigital’s senior vice president of strategy and innovation. “They just want to know they’re getting a fair deal, and if they have any questions about the car, that the salesperson is knowledgeable enough to answer those questions."

Perhaps that's why Elon Musk envisions a different experience altogether for car buyers when purchasing a Tesla. He says that Tesla's store employees are Product Specialists "not on commission and they will never pressure you to buy a car. Their goal and the sole metric of their success is to have you enjoy the experience of visiting so much that you look forward to returning again."