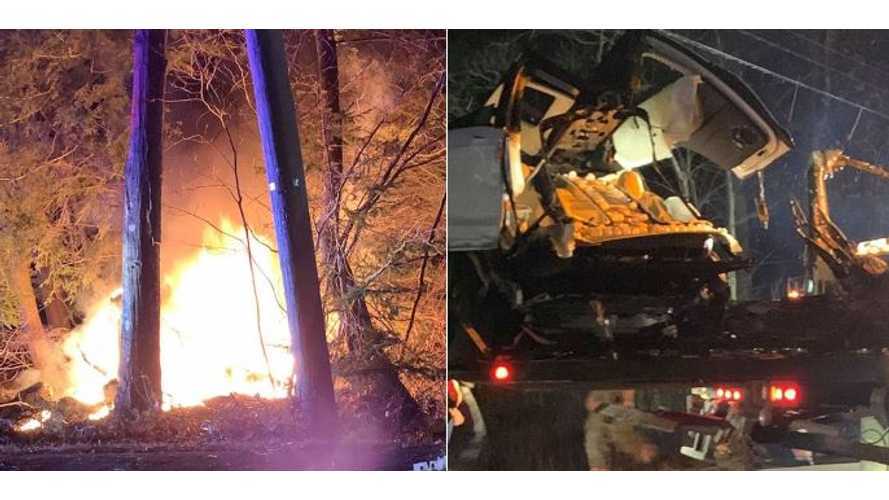 Fire erupted after a Tesla Model X collided with a tree and split in two.

Three teenagers were seriously injured in the wreck. One sustained life-threatening injuries. No fatalities reported.

Number of Tesla Fire-Related Deaths Per Year Equals What?

A 2017 Tesla Model X was driven off the road where it struck a tree. The violent collision split the car in two. Fire began shortly after impact, as the battery pack had been compromised.

Clean up of the wreckage is reportedly still underway, as battery cells were spread throughout the brush.

Three teenagers were injured after one drove a 2017 Tesla Model X off the road and into a tree in southern New Hampshire on Wednesday, according to state police.

Speed was likely a factor in the accident, according to the accident report, and the car split in two and caught fire after the impact.

Update on the Rindge crash:

No fatalities. One car hit a tree off of Perry Rd.

3 victims — a 19 y/o woman and a boy and a girl, both 17. The 17 y/os were taken to Monadnock hospital, the 19 y/o was taken to UMASS (no specifics beyond that). pic.twitter.com/dlepFNzIVz

A day after this horrific crash in Rindge, NH, firefighters still trying to clean up thousands of #Tesla batteries left behind. Hear from a family member of one of the teenage victims coming up at 4 pm on @NBC10Boston and @NECN pic.twitter.com/FPt0JGze3B