The location and reviewer make this Tesla Model 3 honor one of the most significant to date.

We have to say that we saw this coming, but we didn't really know if he'd follow through with it. If you read InsideEVs on a regular basis or follow Autoline, you're probably already aware that hardcore gearhead and active race car driver Henry Payne bought a Tesla Model 3. The crew from Autoline seemed quite surprised, not only that he took the plunge, but also that he actually loves the Model 3. 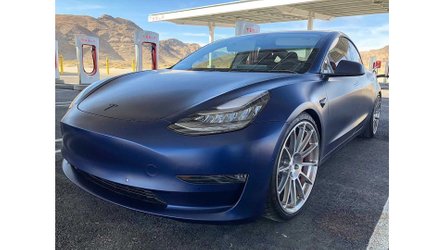 You can't buy Tesla vehicles in Michigan. It's rare to even see a Tesla vehicle in the state, though that's changing rapidly due to the popularity of the Model 3. Still, a few of us at InsideEVs reside in Michigan, and we're here to tell you that the Tesla hate is rampant in our neck of the woods. This is to be expected since Detroit is the hub for the Big Three automakers.

Nonetheless, of the long list of cars Payne had to choose from, he decided to elect the Tesla Model 3 as Detroit News' Car of the Year. We're seeing more and more substantial, mainstream publications adding positive Tesla coverage to their daily news. As most of you are probably aware, there are certain news outlets that tend to publish plenty of negative EV news. But, even those "usual suspects" are seemingly coming around.

Hollywood is determined to expand its Oscars list to offer more diversity. But if it's diversity you want, check out the field for Detroit News Vehicle of the Year.

I tested more than 60 new vehicles this year. There's never been such a range of options for every consumer stripe.

To put the Tesla Model 3’s achievement in perspective, InsideEVs projects sales to eclipse 130,000 units this year. That's nearly double the next best-selling luxury vehicle, the Mercedes GLC SUV. And the Model 3 is a sedan in a sedan-averse market.

Tesla achieved this despite regular predictions by industry experts of its imminent doom, the near-meltdown of its mad-genius CEO, and manufacturing mishaps while rushing to fill a record 450,000 pre-orders.

The $55,000 Model 3 succeeds because it is Apple on wheels. Musk re-imagined the car like Steve Jobs re-thought the phone — as a study in design minimalism that is both gorgeous and more efficient than established platforms. Privately, other automaker execs tell me they admire Tesla for innovations that are pushing the industry forward: over-the-air updates, better connectivity, better user interfaces.

To read the entire review and see Payne's image gallery, follow the links below.