The Iridium E Mobil could become the first all-electric motorhome.

Revealed as a team effort by a consortium of German companies, this eco-friendly solution might become a rather fetching idea for anyone that loves camping and is all in towards a fully electric future. The E Mobil is a result of a partnership between motorhome manufacturer WOF and EFA-S, an electric powertrain manufacturer, who will then jointly produce the vehicle.

If we could venture into predictions, the vehicle will probably utilize the EFA-S powertrain, while the rest of the build and final assembly, will be done by WOF in their own production facilities. 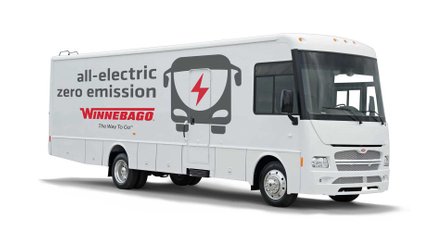 Winnebago Unveils Electric RV Motorhome, But It's Not For Camping

“It will not be a preliminary study, but customers can buy and drive this vehicle in 2019,”

The whole setup looks extremely well fitting towards a heavy laden motorhome. From the details released about the electric powertrain revealed by Golem, we can see that the vehicle will use a synchronous motor, powered by a lithium iron phosphate battery and the EFA-S self-developed battery management system.

According to the information revealed, the E Mobile electric motorhome is slated to have a range of around 200 kilometers (124 miles). Furthermore, the owners will be able to charge the vehicle through a conventional socket, through charging stations up to 22 kW or at CCS fast-charging stations with up to 50 kW. No further information about actual charging times has been revealed.

“These include a synchronous motor, a lithium iron phosphate battery and the EFA-S self-developed battery management system. The range of the motorhome should be at 200 kilometers. It is charged at the conventional socket, at charging stations up to 22 kW or at CCS fast-charging stations with up to 50 kW. How long it takes to charge the battery is not yet known.”

While there are some electric motorhome concepts out there, like Dethleffs’ e-home with 100 miles of range, none of them are anywhere near production. Yes, Nissan revealed an all-electric camper already, but since it's based on the e-NV200 van, it can't be considered a full-size motorhome yet.

For the most part, the 200 kilometers (124 miles) range might not sound great for most travelers. However, campers are not in a rush and that means spending a few days more at a higher number of camping sites doesn't sound like a bad idea at all. After all, plugging it into the socket at a campsite will probably allow you a full charge through the night. And that, for most campers, will be more than enough power.