What in the heck happened here? We really need much more information about this reported Tesla Model S fire.

Sadly, all we have to share with you at this point is a steady stream of tweets about this Tesla Model S via ABC7Now reporter Amanda del Castillo. Obviously, a more detailed report and investigation will ensue. However, for now, check out the barrage of Twitter coverage about this Tesla that's readily available. 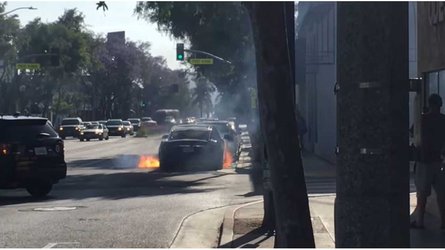 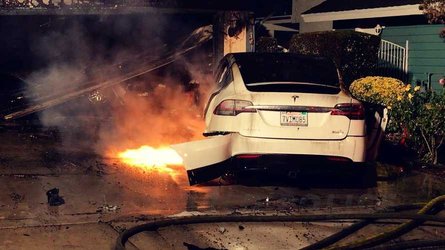 ABC interviewed the Model S owner, and he says that the car was being towed due to a flat tire. He's only owned it for three months and has about 1,200 miles on the car. He claims that he went into the business to handle paperwork, and during that time the Model S caught fire unexpectedly. This seems completely crazy to us, since one would think there would have to be some initiator or catalyst?

Let's hope that we can figure out what really happened here.

.@Tesla... or at least what’s left of the car. We’re in Los Gatos, working on getting you facts about the flames. Easy to see the damage. @sccfiredept on scene. #abc7now #developing pic.twitter.com/JUkG4B4Npn

#NEW @Tesla owner shares this incredible video of his car catching fire. The Saratoga resident says he got the car 3-months ago, it only had 1200-miles. Follow this thread for details on how the situation developed. Also, watch at 11 pm. #abc7now #developing pic.twitter.com/hS7yzWJOwt

#UPDATE After @sccfiredept extinguished fire, the @Tesla began “off-gassing.” Did not reignite. Now fire crews waiting for battery to cool before car can be moved. Video was taken earlier this afternoon by the Tesla owner. Follow this thread & watch at 11 pm. #abc7now #developing pic.twitter.com/hjINc6mExs

#BREAKING We have now moved to Campbell, where the same @Tesla Model S caught fire a second time. This was a 10 minute drive from where crews spent 6-hours, waiting on the car’s battery to cool. #abc7now #developing pic.twitter.com/VtSNkrg96R

.@sccfiredept, “Six hours didn’t do it...” Fire crews spent hours waiting for the battery to cool in Los Gatos. The car was then taken to Campbell where it reignited at 10 p.m. Crews are expecting to work overnight. #abc7now #developing @Tesla pic.twitter.com/GI2Fab5jnP