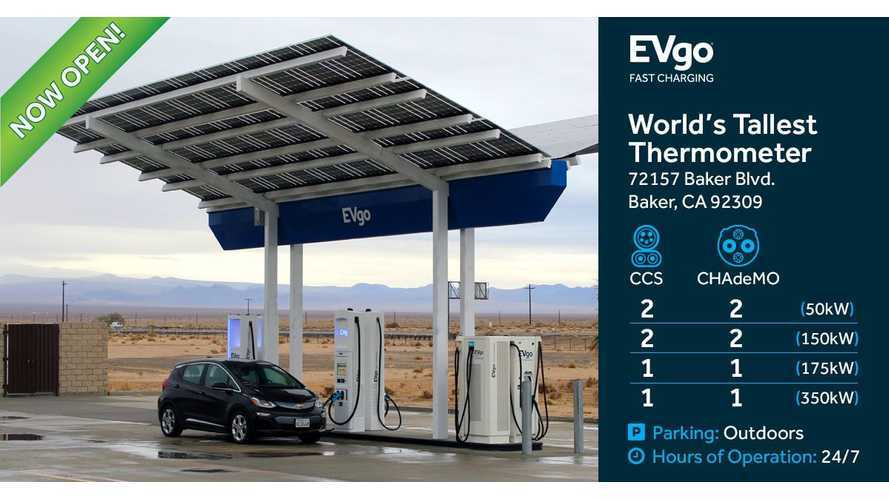 It's been quite some time since EVgo announced the first 350 kW ultra fast charging station in the U.S. in December 2016 to be built in Baker, CA, at the World’s Tallest Thermometer, just off of I-15 between Los Angeles and Las Vegas (270-mile).

The plan was not that easy to execute and finally, in December 2018, the 350 kW station is ready. EVgo initially installed two 50 kW DC fast charger and recently upgraded it with two 150 kW chargers, one 175 kW charger and one 350 kW charger. Each are double-head - CCS1 and CHAdeMO compatible, according to the press release.

"By offering all EV drivers both CCS and CHAdeMO options on all its chargers – fast, super-fast, and ultra-fast – EVgo’s Baker fast charging hub enables all fast charge-capable EV drivers to make the 270-mile trip between Los Angeles and Las Vegas. The expansion of EVgo’s Baker site makes it a technology showcase offering the widest variety of charging speed options available at a single public EV charging location in the US."

Besides the six chargers, EVgo installed a 20 kW solar canopy and second-life energy storage system that utilizes four BMW i3 battery sets - total of 88 kWh and 60 kW (two ESS: 44 kWh and 30 kW each). The 2nd life i3 ESS system is the same as in other locations. Having solar and ESS should minimize peak power demand, but not that much (by up to 80 kW at best).

"The newly expanded Baker fast charging hub builds on the two 50kW fast chargers EVgo previously deployed in order to enable EV drivers to travel the critical Las Vegas to Los Angeles route. Even though no EV available today at commercial volumes is able to charge at 350 kW, EVgo has grown both the number and throughput of fast chargers at Baker in order to test a variety of charging speeds and future-proof customers’ fast charging experiences on this corridor. Since the vehicles themselves guide how fast a particular car can charge, in most cases, today’s EV drivers will find that their EVs will charge at around 50 kW even on the new 150kW, 175kW, or 350kW chargers.The wide array of charging speeds, solar canopy, and BMW 2nd Life Battery storage system at the Baker Station was developed in partnership with the California Public Utilities Commission (CPUC) as a technology demonstration fast charging hub. Supported by a 20 kW solar system and a 60 kW / 88 kWh energy storage system, the station is effectively testing the use of different levels of power and storage at the same site.

EVgo, in conjunction with its technology partners and the University of California San Diego (UCSD), debuted a similar station architecture on a smaller scale in the controlled environment of the UCSD microgrid in June 2016. The Stationary Storage Plus Electric Charging (SSPEC) station went on that same year in November to win the Mobility Innovation Award at Energy Storage North America.

“EVgo is delivering EV drivers the broadest access to fast charging technology. By increasing the number of chargers and offering a variety of charging speeds for both CCS and CHAdeMO standards, we are giving EV drivers the chance at their fastest possible charge between Las Vegas and Los Angeles—including Tesla drivers who use a CHAdeMO adapter. EVgo’s Baker fast charging hub with solar, storage, and super-fast EV charging right at the World’s Tallest Thermometer shows how the EV industry is really heating up.”