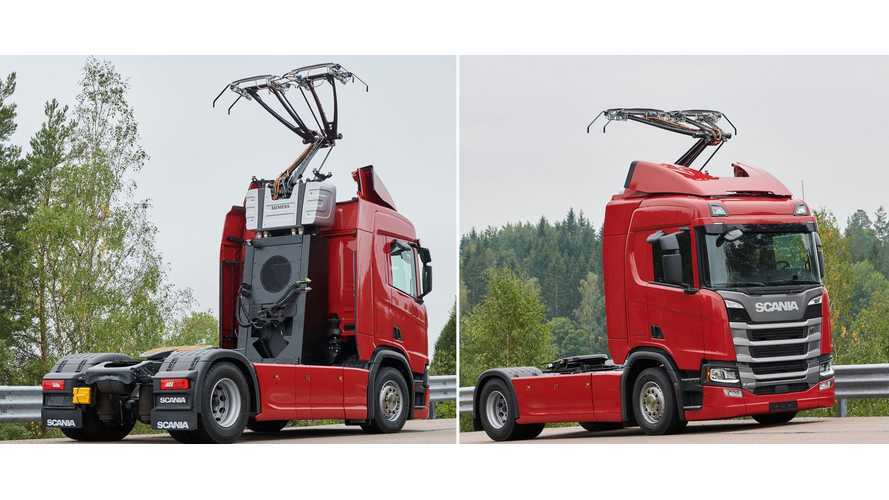 Scania announced that in May 2019 it will supply 15 R 450 hybrid trucks for the German eHighway trials. The trucks will be equipped with special pantograph power collectors, developed by Siemens, so they can drive electric on roads with an overhead catenary system.

So far, several trials like this were conducted around the world with subsidies, but so far no one decided to invest in commercial operation, which suggests that battery-electric trucks are seen as a better solution.

Three places will be electrified:

"The 15 trucks will be equipped with pantograph power collectors, developed by Siemens, mounted on the frame behind the cab for charging while in motion. These trucks will be operated by haulage companies in actual transport operations. Delivery of the first hybrid R 450 truck by Scania for Hessen is scheduled for May 2019. In addition to delivering trucks, Scania will manage vehicle maintenance and data collection from the trials.

Scania has previously been selected as partner in the concurrent research project conducted by Volkswagen Group Research. A hybrid Scania R 450 is expected to be delivered to the project in February and commissioning is ongoing on Siemens test track outside Berlin. A second electrified research vehicle will be delivered in autumn 2019. The research programme will seek to analyse and optimise the powertrain concept, energy management, hybrid transmission, battery ageing and the next-generation cooling system."

“Unlike passenger cars, which remain parked and stationary most of the day, trucks are deployed for long hours in transport assignments when stopping to charge can be highly disruptive in the operations. E-highways offer rational and effective charging en route. The solution also saves batteries and reduces load on the energy network,”.